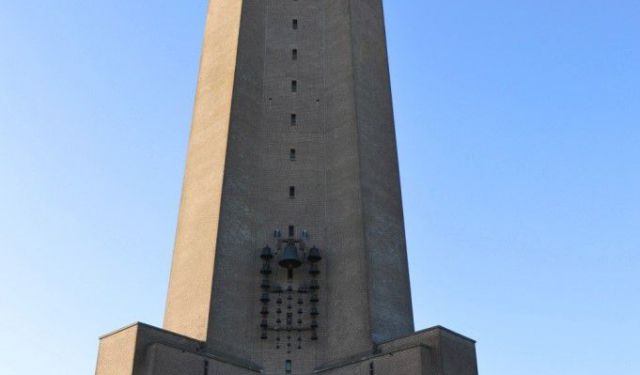 The Ijzertoren (Iron Tower) is a memorial along the Belgian Yser river in Diskmuide. It commemorates the Belgian and Flemish soldiers killed on the front during WWI.

As you walk along the narrow pathway to the monument, hidden speakers call out the names of the war heroes.

No More War - written on the bottom right. AVV-VVK - at the top mean - Alles Voor Vlaanderen, Vlaanderen voor Kristus; All for Flanders-Flanders for Christ.

From the start of Belgium until the first World War, the official language in the Belgian army was French. Most officers spoke French. During World War I, many Flemish soldiers were recruited to fight in the trenches. This resulted in the Flemish Movement during the war, and the demand for more Flemish rights.

The IJzertoren site is the burial place of Flemish soldiers killed during the fighting on the Yser Front.

You take the lift to the top of the tower and enjoy the wonderful view - that is surely a mass grave.... Then you climb down the stairs to experience the sights and sounds of Diksmuide during the Great War. ...... (follow the instructions below for accessing the rest of this article).
This article is featured in the app "GPSmyCity: Walks in 1K+ Cities" on iTunes App Store and Google Play. You can download the app to your mobile device to read the article offline and create a self-guided walking tour to visit the attractions featured in this article. The app turns your mobile device into a personal tour guide and it works offline, so no data plan is needed when traveling abroad.