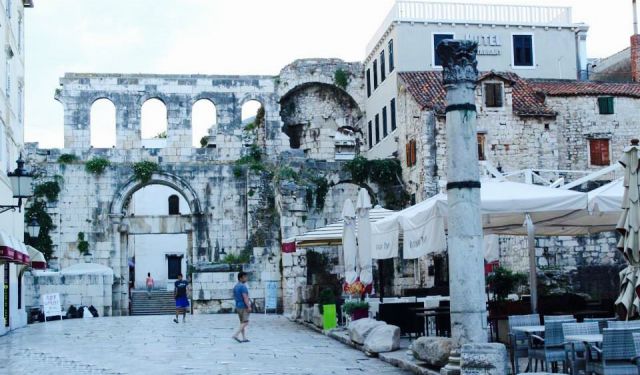 Set on a peninsula jutting into the Adriatic Sea, Split is the home to one of the largest and best preserved Roman palaces in the world. In 295 AD the Roman Emperor Diocletian ordered an enormous palace to be built here, where one day he intended to retire. Diocletian was an unlikely Emperor as he was born into a family with a low status. He worked his way up through the military ranks and eventually became a cavalry commander under Emperor Carus. After the death of Emperor Carus and his son, there was no one to be proclaimed Emperor, so Diocletian took it upon himself to install himself as the new Emperor. He would go on to stabilize the region and eventually be the first emperor to ever retire, comfortably in his palace in Split, which is a heavily fortified compound.

Diocletian’s palace has been a place of constant life with people living inside the palace walls and throughout the centuries, changing the original look of the palace over time. Eventually, Split would become part of the Venetian territories, along with Zadar which would experience a period of economic prosperity. ...... (follow the instructions below for accessing the rest of this article).
This article is featured in the app "GPSmyCity: Walks in 1K+ Cities" on iTunes App Store and Google Play. You can download the app to your mobile device to read the article offline and create a self-guided walking tour to visit the attractions featured in this article. The app turns your mobile device into a personal tour guide and it works offline, so no data plan is needed when traveling abroad.