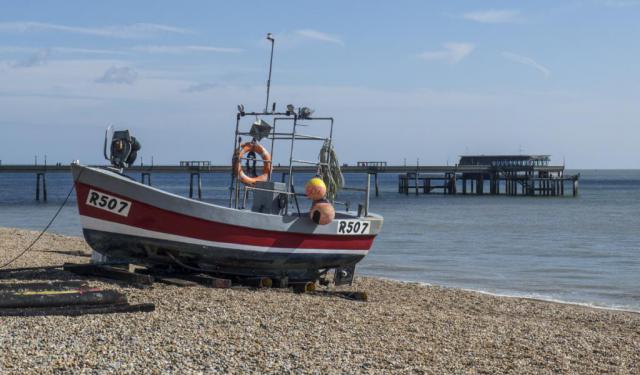 Discover the Delights of Deal on the Coast of Kent, Deal, England (B)

Deal on the coast of Kent has one of the prettiest, unspoilt sea-fronts and a history as colourful as the buildings that stretch along it.

I approached Deal along the old, narrow Cinque Ports Road that hugs the coastline. Deal was not one of the original five Cinque Ports but was later included as a limb of neighbouring Sandwich. As soon as I turned on the promenade I felt compelled to stop and enjoy the beautiful vista in front of me. The extensive pebble beach merged with the blue sea on one side. Pastel painted residential buildings and hotels lined the sea front on the other. The sight of Deal Pier stretching out to sea compelled me to stop and take a walk along it.

There has been a pier on the sea front at Deal since 1838. The original pier was shorter than intended and was used as a docking point for seamers until it was thrown onto the beach by a storm in 1857. It was sold for scrap. A second pier was built in 1861 using stone from the ruined Sandown Castle. This was a much longer pier and included a steamer landing stage and a tramway to transport goods and luggage. Seating was available along its full length and there were two toll houses at the entrance. The addition of a pavilion at the top of the pier meant it became a popular venue for concerts and fishing. The pier was badly damaged by ships colliding with the structure during storms in 1864 and 1873. On both occasions repairs were effected and it continued to be used as a popular amenity. It was bought by Deal Town Council in 1920. This pier suffered serious damage during the Second World War and had to be demolished. Only the toll houses survived. The locals missed their pier and a third pier, the one that exists today, was built in 1954. The toll houses were knocked down when this pier was built. ...... (follow the instructions below for accessing the rest of this article).
This article is featured in the app "GPSmyCity: Walks in 1K+ Cities" on iTunes App Store and Google Play. You can download the app to your mobile device to read the article offline and create a self-guided walking tour to visit the attractions featured in this article. The app turns your mobile device into a personal tour guide and it works offline, so no data plan is needed when traveling abroad.