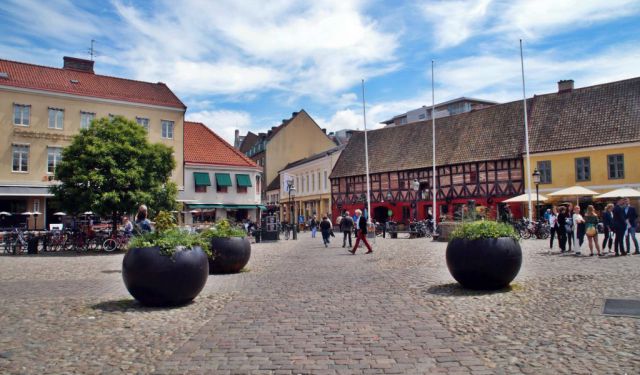 Discovering Malmö: On a Day Trip to Scania’s Capital, Malmo, Sweden (B)

For too long now, Malmö has been underrated and had a reputation of being an unsafe city with too many criminals and too much ethnic division. It has been named the ‘crime capital of Scandinavia’. It has been called ugly, uninteresting, bland. But I’d never actually seen it for myself.

Despite the fact that Malmö lies literally JUST across the Øresund Bridge from Copenhagen, only an hour on the bus, I hadn’t yet set foot there. When my childhood friend Anna visited me for four days here in Copenhagen in mid June, we decided to pay the city a visit!

Malmö is the fifth largest city in Scandinavia, the third largest city in Sweden, and the capital of the county of Scania. The city was founded in 1275 and was the second largest city in Denmark for many hundreds of years, before Scania became Swedish. The city is home to 700,000 people, of which 43 % have a foreign background, including Denmark as one of the main sources of immigration, as Malmö is a cheaper city to live in than Copenhagen, so many choose to move to Malmö and work in Copenhagen. ...... (follow the instructions below for accessing the rest of this article).
This article is featured in the app "GPSmyCity: Walks in 1K+ Cities" on iTunes App Store and Google Play. You can download the app to your mobile device to read the article offline and create a self-guided walking tour to visit the attractions featured in this article. The app turns your mobile device into a personal tour guide and it works offline, so no data plan is needed when traveling abroad.