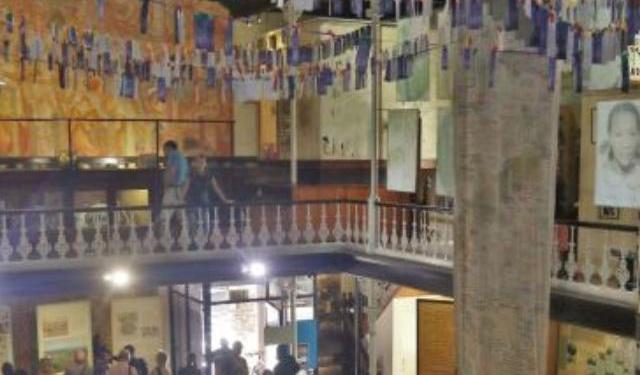 “We were told that we didn’t qualify to live there anymore because of the colour of our skin.” – Joe Schaffers, ex-resident of District Six. Removed in 1967 at the age of 28.

“Every day to work I would pass by my house, out of which my wife, kids and me had been forcefully removed. Every day I would stop and look at it, seeing the bulldozers getting closer. Until one day our house was gone, just a vacant plot remained, on which I stood with an empty heart.” – Noor Ebrahim, ex-resident of District Six, Cape Town. Removed in 1970 at the age of 26.

“Many streets from which people were removed and houses demolished are still empty today. The goal was to divide people and break us.” – Ruth Jeftha, ex-resident of District Six.

Today Joe, Noor and Ruth are here, at the District Six museum in Cape Town, South Africa. Housed in a former church and the only original building of the District Six that is still standing, more than a museum, it is a commemoration place where former residents reaffirm their identity by sharing their life stories with visitors, celebrate their heritage, confront the complexity of history, and try to come to terms with their forced removals. ...... (follow the instructions below for accessing the rest of this article).
This article is featured in the app "GPSmyCity: Walks in 1K+ Cities" on iTunes App Store and Google Play. You can download the app to your mobile device to read the article offline and create a self-guided walking tour to visit the attractions featured in this article. The app turns your mobile device into a personal tour guide and it works offline, so no data plan is needed when traveling abroad.