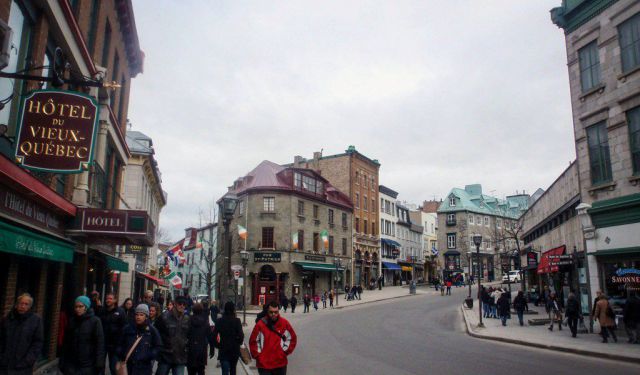 In April 2012 Caroline and I went to Québec City for a weekend. It’s a four-hour drive from Burlington, Vermont. Québec is known to be cold, and that’s exactly what it was. It was freeeezing cold!

After checking in into our hotel we picked up a nice little booklet with information on things to see and do, including a couple of city walks.

Despite the bad weather, we immediately headed out to do one of those walks. One thing that struck me straight away is how small Old-Québec actually is. Québec as a metropolitan city has more than 500,000 inhabitants, but the historic city center is rather compact. The historic and cultural value is immense though. That’s why le Vieux-Québec (people speak French there after all) is a UNESCO World Heritage Site.

Some of the snow hadn’t melted yet and that was the reason why the old city walls were closed to the public. The stairways were too slippery. Kind of a pity, because that would have made for a really nice walk around town. We didn’t make it to the Citadelle either. ...... (follow the instructions below for accessing the rest of this article).
This article is featured in the app "GPSmyCity: Walks in 1K+ Cities" on iTunes App Store and Google Play. You can download the app to your mobile device to read the article offline and create a self-guided walking tour to visit the attractions featured in this article. The app turns your mobile device into a personal tour guide and it works offline, so no data plan is needed when traveling abroad.