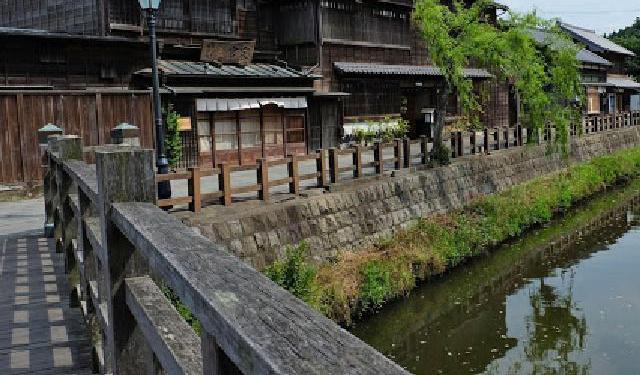 A year or so before this trip, I made a friend on Instagram. Yumiko agreed to meet with me when I told her I would have one day to spend in Narita (or anywhere near Narita) before flying back to Cebu.

We were supposed to meet at Sawara Station, but when I found out that the train from Narita Airport only comes once every 30 minutes (or up to an hour on non-peak times), Yumiko decided to pick me up at the airport.

I arrived at Narita Airport Terminal 3 and waited for Yumiko. When she sent a message that she had arrived, I could not find her. She was waiting at Terminal 2! Oops! I had to hurry and get on a bus that would take me to Terminal 2.

It was a 30 kilometer drive from Narita Airport to Sawara Town in Katori City (Chiba). Since Yumiko couldn't speak English very well and I could not speak Japanese at all (save for the very basic greetings), it was a pretty quiet drive.

Yumiko found a parking lot near the preserved merchant area along the Ono River. When Yumiko paid the parking fee, she received a discount coupon for the boat tour. And that's what we did: take a 30-minute boat tour along the Ono River (1300 yen per person; but because we had a coupon, we paid 1100 yen per person). ...... (follow the instructions below for accessing the rest of this article).
This article is featured in the app "GPSmyCity: Walks in 1K+ Cities" on iTunes App Store and Google Play. You can download the app to your mobile device to read the article offline and create a self-guided walking tour to visit the attractions featured in this article. The app turns your mobile device into a personal tour guide and it works offline, so no data plan is needed when traveling abroad.