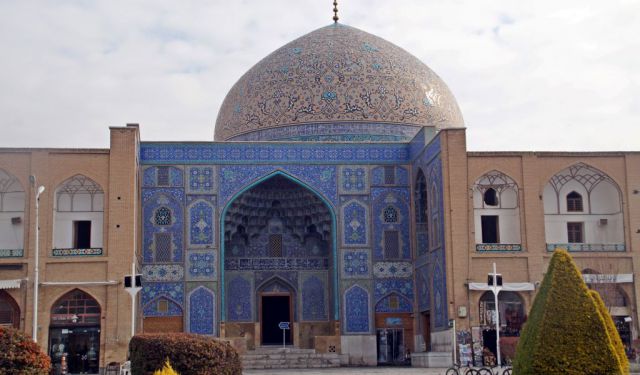 Esfahan: The Cultural Capital of the Islamic World, Isfahan, Iran (B)

In the evening after our visit to Abyaneh, we caught a bus to the next city on our itinerary, the city of Esfahan. Esfahan is located on the old silk trading route and was once one of the largest and most important cities in the world. The city flourished under the Safavid dynasty in the 16th and 17th centuries, when it was the capital of Persia.

Today, Esfahan is the third largest city in Iran with a population of 2,4 million. Esfahan is Iran’s number one tourist destination, famous for its Persian-Islamic architecture, including the Naghsh-e Jahan Square, which is one of the largest squares in the world and has, among other sites in Esfahan, been designated by UNESCO as a World Heritage Site.

At 5 PM, we arrived in Esfahan and caught a taxi to the Amir Kabir Hostel, where we stayed for the night. I was really surprised by the size and the look of the Esfahan, as it was much more city-like than I had expected. I had thought it would be similar to ancient Kashan, which I loved, but unfortunately, it reminded me quite a bit of Tehran with its crazy traffic. I hoped that seeing some of the famous sights of the city would change my slightly negative first impression. We had a long list of interesting places to see for the next day, so after researching on the fastest internet that we’ve had so far in Iran (it was such a welcome change!), we went to bed and slept until 8 AM the next morning. ...... (follow the instructions below for accessing the rest of this article).
This article is featured in the app "GPSmyCity: Walks in 1K+ Cities" on iTunes App Store and Google Play. You can download the app to your mobile device to read the article offline and create a self-guided walking tour to visit the attractions featured in this article. The app turns your mobile device into a personal tour guide and it works offline, so no data plan is needed when traveling abroad.