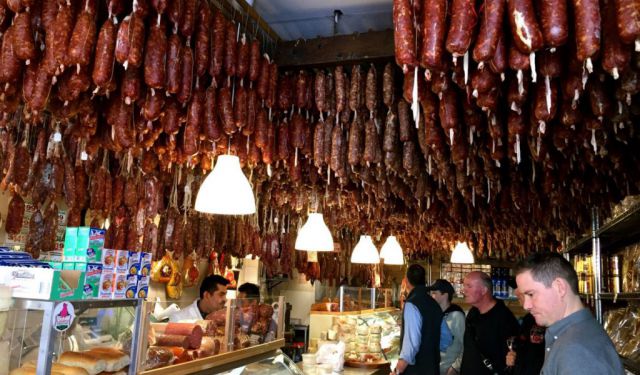 Do you like Italian food? Who doesn’t, right. Ever since we vacationed two summers in a row in Italy in places such as Rome and Tuscany, we’ve been craving Italian food more than ever. Which is why we love going to Arthur Avenue in the Bronx in New York City, the “real Little Italy” according to many New Yorkers.

When you talk to those who live in the Bronx, they’ll tell you the touristy Little Italy on Mulberry Street in lower Manhattan is for – you named it – tourists. Commercialized and Disney-ish, as some people refer to it. But I’m not going to get into that. What I do know is that Arthur Avenue, located in the Belmont section of the Bronx, has shop after shop of Italian delicacies including meats, cheeses, pastas, breads and mouth-watering pastries. Restaurants are a plenty, and old-school barber shops and gelatarias can be found while strolling around.

The popular Arthur Avenue Retail Market is here, an indoor market full of character, not to mention all sorts of goodies. Near one of the entrances is a cigar workshop, La Casa Grande, where you can see men hard at work making cigars. Walk a little further and you will find the very cool Bronx Beer Hall, the beloved Mike’s Deli, Peter’s Meat Market and Greco’s, just some of the vendors that make up the market. It’s great for food-shopping, as well as people-watching! ...... (follow the instructions below for accessing the rest of this article).
This article is featured in the app "GPSmyCity: Walks in 1K+ Cities" on iTunes App Store and Google Play. You can download the app to your mobile device to read the article offline and create a self-guided walking tour to visit the attractions featured in this article. The app turns your mobile device into a personal tour guide and it works offline, so no data plan is needed when traveling abroad.