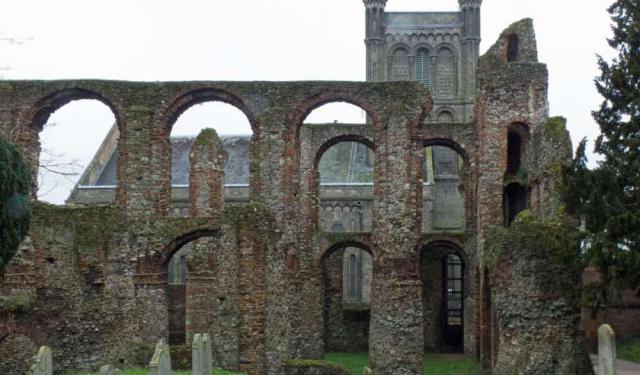 Colchester, in Essex, claims to be the oldest recorded town in England. It was certainly the first Roman colonia, built on the site of an earlier fortress. And you can still see quite a bit of Roman Colchester, or Camulodunum, as it was once known.

The Romans landed in Britain in 43 CE. They built a fortress in what is now Colchester and six years later they created a colonia (permanent settlement of army veterans) here. They called the new town Camulodunum, meaning “fort of Camulos” (the Celtic god of war).

In 60 CE the town was attacked by the Iceni, a local tribe led by the Celtic queen Boudica. Although the rebellion was ultimately unsuccessful, large parts of Camulodunum were destroyed. The town was rebuilt and reinforced, and prospered as a Roman settlement for the next 300 years. Archaeological discoveries, including the only known Roman circus in Britain, suggest that it became an important town.

For the visitor the most impressive Roman structure in Colchester is the city walls. Built after the Boudican attack, the wall was almost 3 km long and 6 m high. It continued to protect the city for many centuries after the Romans departed. Bastions were added in the 15th century, and houses were later built into the fabric of the wall. ...... (follow the instructions below for accessing the rest of this article).
This article is featured in the app "GPSmyCity: Walks in 1K+ Cities" on iTunes App Store and Google Play. You can download the app to your mobile device to read the article offline and create a self-guided walking tour to visit the attractions featured in this article. The app turns your mobile device into a personal tour guide and it works offline, so no data plan is needed when traveling abroad.