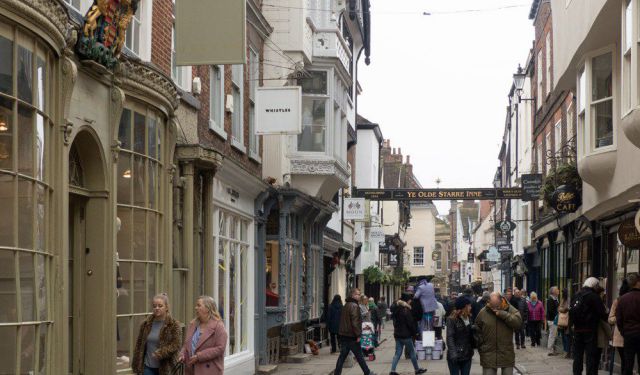 York is better known as a medieval city than for its Roman origins. Yet it was once a very important Roman town. I set out to discover what can still be seen of Roman York today, and to get some clues about how it may have looked in the past.

The Roman 9th Legion arrived in what is now York in 71 AD. Attracted by the location between two rivers and surrounded by forest, they built a fortress to accommodate 5,000 soldiers, and called it Eboricum. The new settlement became Roman Britain’s second most important town (Londinium was the first).

But in the later years of the Roman Empire Eboricum became more important, its influence spreading beyond Britain. Two Roman emperors – Septimus Severus and Constantius I – ruled from York, and died in the city. And a third was proclaimed emperor by the Roman army in York. This was Constantine, famous for adopting Christianity as the formal religion of the empire.

I followed the Roman York trail, produced by the local tourist office. This takes you to the fragments of Roman York that can still be seen today. There are fragments of the city wall built by the emperor Constantius I, and a Roman column that stands in the place where Constantine was made emperor in 306 AD. ...... (follow the instructions below for accessing the rest of this article).
This article is featured in the app "GPSmyCity: Walks in 1K+ Cities" on iTunes App Store and Google Play. You can download the app to your mobile device to read the article offline and create a self-guided walking tour to visit the attractions featured in this article. The app turns your mobile device into a personal tour guide and it works offline, so no data plan is needed when traveling abroad.