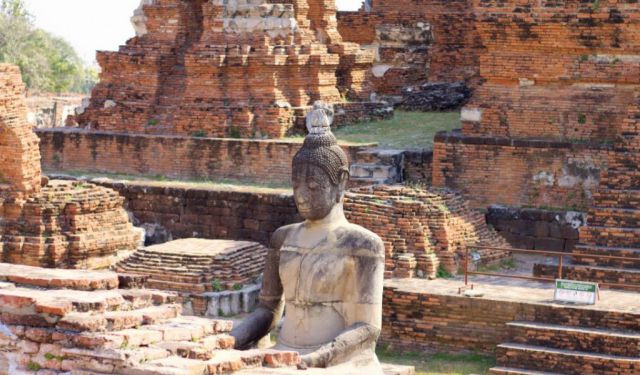 After a few relaxing days by the sea near Chumpon it was time to head north in search of some history and culture. The vague plan was to stay in Chiang Mai and beyond for a few days after hearing what a funky place it is and then move to our next country, wherever that may be.

Looking at the lengthy train journey back to Bangkok and then onto Chiang Mai we decided to break it up a little with a couple of nights in Ayutthaya, once the capital of Siam, and take some time to explore the ruins.

Looking back I’m still not entirely sure why we decided to take a 3rd class train from Chumphon back to Bangkok, it seemed like a good idea at the time. At a distance of nearly 500 km we didn’t fancy a bus but left it too late to book a 2nd or even 1st class train back to the capital. We instead opted for a 3rd class train leaving at 7.30pm from Chumphon which pulled into Bangkok Hualamphong station around 5am the next morning.

It was quite an experience to be squashed in on a small double seat, facing backwards with zero leg room as the locals opposite us had stuck their massive bags of rice under all the closest seats. This would have been fine for a few hours ride but about 6 hours in we were really regretting the choice of transportation. We both tried our best to get some shut eye but the combination of minimal space, frequent stopping and locals wandering up and down the carriage, shouting loudly whilst trying to sell everything from coffee to giant beans, meant sleep was not really an option. ...... (follow the instructions below for accessing the rest of this article).
This article is featured in the app "GPSmyCity: Walks in 1K+ Cities" on iTunes App Store and Google Play. You can download the app to your mobile device to read the article offline and create a self-guided walking tour to visit the attractions featured in this article. The app turns your mobile device into a personal tour guide and it works offline, so no data plan is needed when traveling abroad.