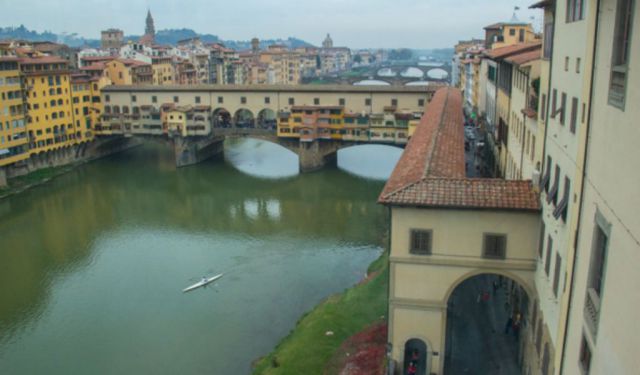 Florence is truly a treasure trove of sights to see and things to do and I always leave this beautiful city with a list of things I still have not done. On my last visit I had five new experiences. The first, and most exciting, was staying in a city centre hotel, Albergo Firenze just one street away from Piazza Duomo. On my way back to the hotel each day I would stop in the piazza and watch the Duomo glow in the late afternoon sun.

The hotel was in a small courtyard, Piazza Donati which had some historical significance as one could see how a medieval tower had been incorporated into the surrounding buildings. When Florence became a free city in 13th Century and a republic was founded it was decreed that all towers (hitherto an indication of wealth) had to be cropped to signify that the age of clans and civil wars was over.

My second experience was a visit to the Uffizi Gallery, to my shame I had never achieved on countless visits to the city. My excuse for such an omission was that I had never been able to find my way in. I had found the entrance for groups and an entrance for advance bookings but not an entrance for that particular day. It was only by chance that I found it this time when a colleague remarked that no-one was queueing to get in as we passed by. I doubled back as soon as I could and found that the ticket booth for that day was behind the one for advance bookings. As it was a weekday in November the small galleries (over 90 of them) were relatively empty and it was a pleasure strolling around admiring the paintings and sculptures on display. The venue, the old offices of the Medici family, was also impressive. ...... (follow the instructions below for accessing the rest of this article).
This article is featured in the app "GPSmyCity: Walks in 1K+ Cities" on iTunes App Store and Google Play. You can download the app to your mobile device to read the article offline and create a self-guided walking tour to visit the attractions featured in this article. The app turns your mobile device into a personal tour guide and it works offline, so no data plan is needed when traveling abroad.