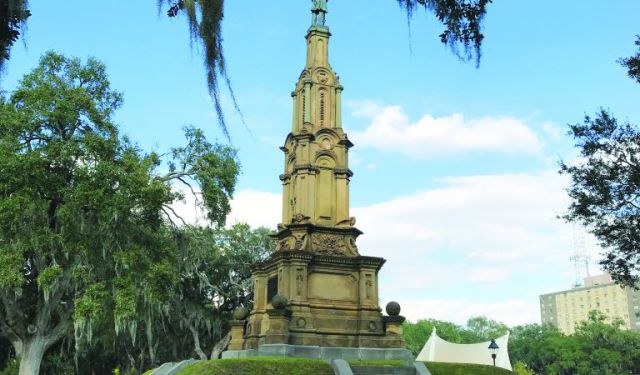 The fountain at Forsyth Park is one of the most photographed spots in the city. It has become an icon of Savannah.

This 20-acre park, named for Governor John Forsyth and laid out in 1851, borders the Historic District and is bounded by Park Avenue, Drayton, Gaston, and Whitaker Streets. The main walkway is highlighted by the famous white fountain, erected in 1859 and restored in 1988. The park also contains the “Fragrant Garden for the Blind” and two large war memorials.

The park is host to a variety of cultural events including the Savannah Symphony Picnic in the Park, the Savannah Jazz Festival, and the Savannah Shakespeare Festival. It also plays host to a lot of picnics, games of Frisbee and afternoon naps under accommodating live oak trees. And if you feel the need for a hit of caffeine or a snack, there is a Starbucks in the park.

The large Confederate monument in Forsyth Park honors local Civil War veterans as well as those who died in the bloody conflict. A bronze soldier in Confederate uniform stands atop a sandstone base, facing north, following the tradition of placing a statue to face his enemy. A raised relief carving shows a grieving widow sitting under a weeping willow tree. There are two busts of Savannah Civil War heroes, Major General Lafayette McLaws and Brigadier General Francis S. Bartow, within the iron fence that surrounds the monument. ...... (follow the instructions below for accessing the rest of this article).
This article is featured in the app "GPSmyCity: Walks in 1K+ Cities" on iTunes App Store and Google Play. You can download the app to your mobile device to read the article offline and create a self-guided walking tour to visit the attractions featured in this article. The app turns your mobile device into a personal tour guide and it works offline, so no data plan is needed when traveling abroad.