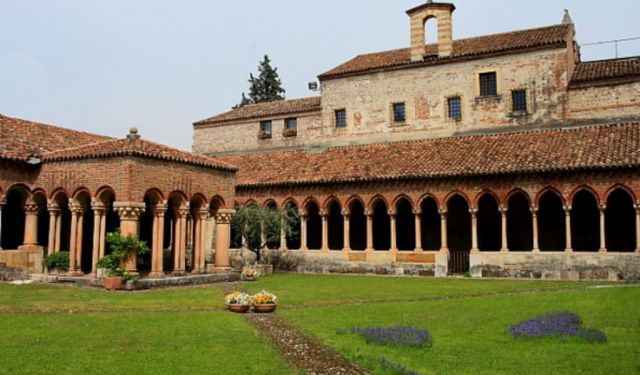 I craned my neck and squinted into the sun in order to see the statue of Cangrande I on top of its column. We were in the private cemetery of the della Scala family (whose members were known as the Scaglieri) which contains the tombs of the three most important members of the that ruled Verona for 100 years during the Middle Ages. The impressive tombs or arche of Cangrande I, Mastino II and Cansignorio are considered the most beautiful examples of gothic art in Italy. The design of railings around the cemetery incorporates ladders (scala) which was the symbol of the family as well as the dog (cane in Italian). Dogs are replicated in sculptures on the front of the tomb of Can Grande. This tomb is above the entrance to the small private church of the della Scala family – the church of Santa Maria Antica that was built long before the family used its courtyard as a cemetery.

This family rose out of the muddied history that followed the collapse of the Roman Empire. Their reign began in 1259 when Mastino della Scala was elected the captain of the citizens of Verona. When the citizens refused to re-elected him he took the position by force and the Scaglieri ruled the city for a century. Although there were ups and downs during their reign for Verona it was a period of stability and growth. In particular, Cangrande, the most famous head of the family, brought peace and prosperity to Verona. He loved his city and its people loved him. During his rule Dante and Giotto stayed in Verona. His tomb was the first to be built. His equestrian statue, to celebrate his military success, was erected in the small cemetery but has since been replaced by a replica and the original was moved to the museum in Castelvecchio. ...... (follow the instructions below for accessing the rest of this article).
This article is featured in the app "GPSmyCity: Walks in 1K+ Cities" on iTunes App Store and Google Play. You can download the app to your mobile device to read the article offline and create a self-guided walking tour to visit the attractions featured in this article. The app turns your mobile device into a personal tour guide and it works offline, so no data plan is needed when traveling abroad.