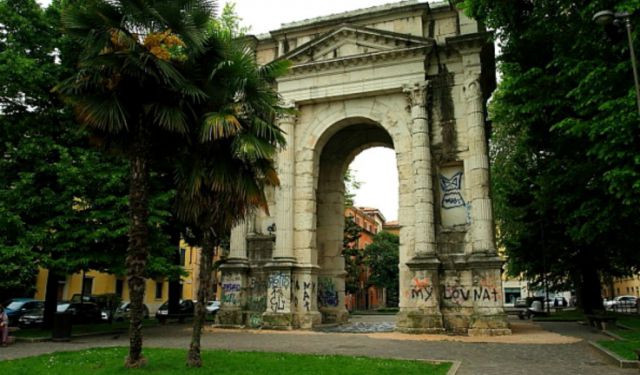 I stepped through the archway Portoni della Bra that leads into Piazza Bra from Corsa Porto Nuova and it felt as though I had gone back in time. A Roman amphitheatre, the Arena, filled my horizon. When it was built by Augustus, two thousand years ago, it was outside the first circle, the Roman circle, of city walls. Now it is inside the modern city. Originally the Arena was surrounded by two walls but the outer wall was destroyed by an earthquake and only a small part of it remains. This section, known as the Ala (wing) is a good example of the original building material – large blocks of lustrous white and pink limestone from nearby Valpolicella. It is the third largest Roman amphitheatre remaining in Italy and the best preserved.

There was no time to linger as I was on my way to find more Roman remains in Verona. There was no time to linger as I was on my way to find more Roman remains. I crossed Piazza Bra which derives its name from braida which in Veronese means ‘large open space’. This piazza is paved with small granite cobblestones in different colours ranging from shades of grey to blue, red and green tints. When this area was paved in 1782 it was called the Listrone and is the most popular place for an evening stroll. I would be back later to join in but now I left the piazza and followed the famous shopping street Via Mazzini until it emerged in Piazza delle Erbe that was once the Roman Forum. Just beyond this piazza I found the first of the two remaining Roman gates, Porta Leoni. This gate had been incorporated into more modern buildings and its original name was not known but it was christened the Gate of Lions when excavations revealed a tomb decorated with two lions. It also became clear that this was not just a gate but a larger structure that included two towers and barracks for the soldiers. The remains of this structure have been exposed to public view. All that remains of Porta Borsari, which was a similar construction, is the façade that arches over the ingress into the old city. All around the city there are subterranean excavations some of which can be viewed through glass panels and some can be visited. ...... (follow the instructions below for accessing the rest of this article).
This article is featured in the app "GPSmyCity: Walks in 1K+ Cities" on iTunes App Store and Google Play. You can download the app to your mobile device to read the article offline and create a self-guided walking tour to visit the attractions featured in this article. The app turns your mobile device into a personal tour guide and it works offline, so no data plan is needed when traveling abroad.