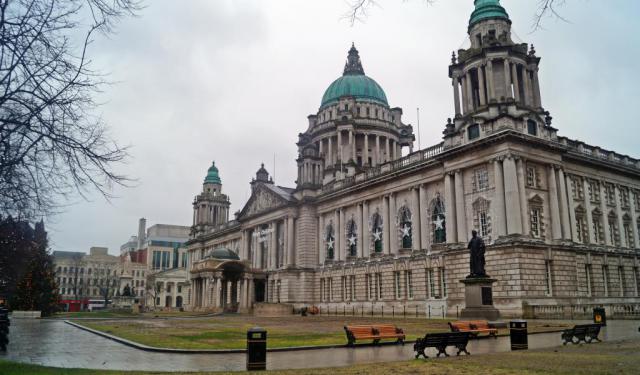 Both Bethann and I had been told by several people that Belfast is a must-see on the British isles. Despite us being tired from celebrating New Years the night before, we decided to go on a day trip to Belfast on January 1st. The bus ride from Dublin took just over two hours, and since we didn’t leave till 12 PM, we only had about four hours to explore Belfast.

Belfast, which is the capital of Northern Ireland, is a very charming city and deserves much more than just four hours of sightseeing, but the weather was terrible that day; it was wet, windy and cold, and the sun set early at 4 PM, but we did manage to see some of the highlights in and around the city center.

The bus took us to the Europa Bus Station, located a few streets from the City Hall, where we started our sightseeing tour. The City Hall was a surprise to both of us, as city halls are generally quite insignificant, but this one in Belfast is beautiful and definitely worth seeing. The City Hall was built in 1906 from Portland stone in Baroque Revival style. ...... (follow the instructions below for accessing the rest of this article).
This article is featured in the app "GPSmyCity: Walks in 1K+ Cities" on iTunes App Store and Google Play. You can download the app to your mobile device to read the article offline and create a self-guided walking tour to visit the attractions featured in this article. The app turns your mobile device into a personal tour guide and it works offline, so no data plan is needed when traveling abroad.