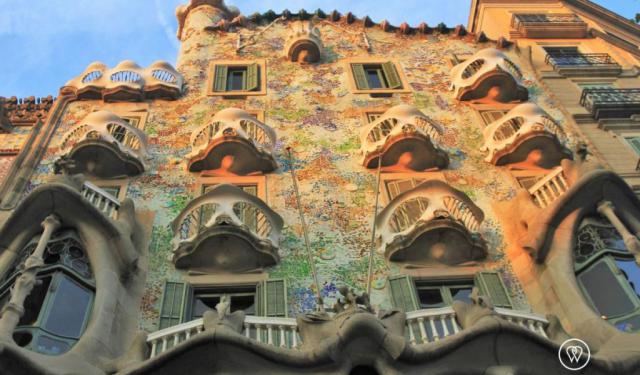 At the turn of the 20th century, the Passeig de Gràcia is the place to settle in for the powerful and wealthy of Barcelona. In 1903, Josep Batlló a rich textile industrialist buys a 25-year old house on this most prestigious street of the new and modern El Eixample district. However, Batlló’s house looks a bit dull next to the neighbouring Casa Amatller designed by the Catalan architect Puig i Cadafalch. He commissions the famous Gaudí to rebuild it completely, but the highly creative genius convinces him to keep the structure – just adding two levels – and redesign the façade and floors.

Walking the Passeig de Gràcia, the Casa Batlló cannot be missed and its unique joyful façade resembles the impressionist waterlilies by Claude Monet. Some balconies looking like carnival masks scatter the colourful wall, when the roof mimics fish scales of a parrot fish summited by the spine of a multicolour dragon, maybe the dragon slayed by Saint George the patron of Catalonia dear to Gaudí, a proud nationalist. ...... (follow the instructions below for accessing the rest of this article).
This article is featured in the app "GPSmyCity: Walks in 1K+ Cities" on iTunes App Store and Google Play. You can download the app to your mobile device to read the article offline and create a self-guided walking tour to visit the attractions featured in this article. The app turns your mobile device into a personal tour guide and it works offline, so no data plan is needed when traveling abroad.