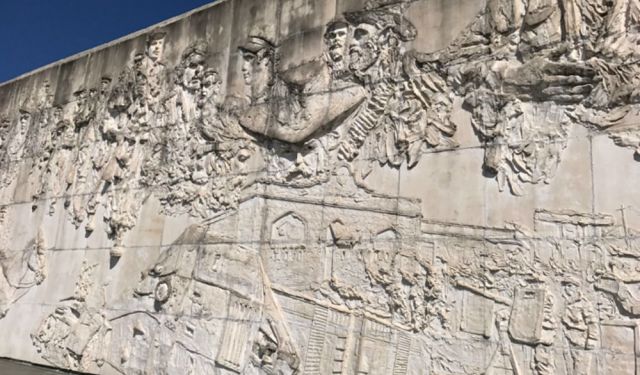 From Trinidad to Havana and What Falls in Between, Santa Clara, Cuba (B)

It is our final day in Cuba. Our tour had a few stops planned for our drive from Trinidad to Havana for our last day in Cuba. Upon departing Trinidad, we drove through the Valle de los Ingenios which is a series of three valleys that was the center for sugar production from the late 18th century until the late 19th century.

Sugar production was introduced to Cuba by Spain in 1512. Soon the island became the world’s foremost producer of sugar and sugar production was Cuba’s main industry. At its peak, there were over fifty sugar cane mills operating in the three valleys with over 30,000 slaves. After the Wars of Independence, the plantations were left abandoned. Today, while most the mills are in ruins, there are a few structures remaining. We stopped to see the plantation of Manaca Iznaga whose main house, some slave quarters, and a tower still stood. The tower was built to watch over the working slaves.

We passed through the market where locals tried hard to sell their wares. Page was nice enough to buy some Cuba aprons for our Taste of Cuba party we are having in Denver. We took a brief look at the house and then headed to the tower for beautiful views of the surrounding area. There were quite a few stairs to climb and a few low ceilings, but we succeeded at making it to the top. ...... (follow the instructions below for accessing the rest of this article).
This article is featured in the app "GPSmyCity: Walks in 1K+ Cities" on iTunes App Store and Google Play. You can download the app to your mobile device to read the article offline and create a self-guided walking tour to visit the attractions featured in this article. The app turns your mobile device into a personal tour guide and it works offline, so no data plan is needed when traveling abroad.

Create Your Own Self-Guided Walks in Santa Clara
Guide Name: From Trinidad to Havana and What Falls in Between
Guide Location: Cuba » Santa Clara
Guide Type: Self-guided Walking Tour (Article (B))
Author: Elizabeth Bankhead
Read it on Author's Website: https://adventuresofacouchsurfer.com/2017/02/22/from-trinidad-to-havana-and-what-falls-in-between/
Sight(s) Featured in This Guide: