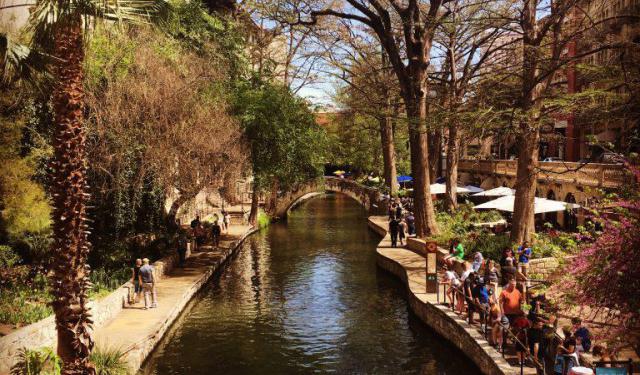 Are you planning to visit San Antonio, Texas? When visiting this amazing city, there are a ton of great places to see and fantastic places to eat. San Antonio is also an amazing place for families to visit or for a romantic weekend with your partner. We really enjoyed our time in San Antonio and we’ve put together a great list of must -do’s and must-eat restaurants. After you visit, we know you’ll fall in love with San Antonio too!

This blog contains affiliate links which means we may receive a small commission (for which we are grateful) at NO additional cost to you. Click HERE to read our full disclosure.

No visit to San Antonio would be complete without a visit to The Alamo. Originally called Mision San Antonio de Valero, The Alamo was built in the 1700’s by Roman Catholic Missionaries. Undoubtedly, The Alamo is best remembered as a major battle site in 1836 during the Texas Revolution. Shortly thereafter, the battle cry of “Remember the Alamo” became a national cause. Interestingly, The Alamo has stood under the flags of six different nations and served as the garrison for five armies. While most people imagine The Alamo as a large complex in the middle of nowhere, it’s actually in the heart of San Antonio. Given the location of The Alamo, the entire area is surrounded by shops and restaurants. The Alamo was designated a U.S. National Landmark in 1960, added the to U.S. Registry of Historic Places in 1966 and became a UNESCO World Heritage Site in 2015. Tip: While visiting The Alamo is free, a guided tour will run you $15 (children 8 and under are free). We highly recommend the guided tour. It’s interesting and will give you a much better sense of why The Alamo is important to both Texas and American history. ...... (follow the instructions below for accessing the rest of this article).
This article is featured in the app "GPSmyCity: Walks in 1K+ Cities" on iTunes App Store and Google Play. You can download the app to your mobile device to read the article offline and create a self-guided walking tour to visit the attractions featured in this article. The app turns your mobile device into a personal tour guide and it works offline, so no data plan is needed when traveling abroad.