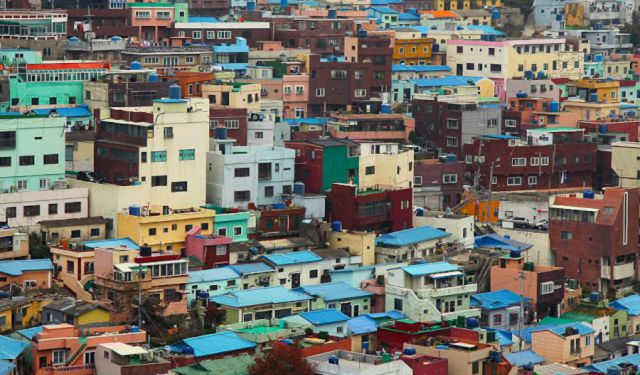 My Korean friends were puzzled why I wanted to go to Gamcheon Village. They, residents of Busan themselves, have never been there. Gamcheon Village, they said, is one of the poorest areas of Busan. That may have been true back in the 50s, when Gamcheon began as a slum town, filled with refugees as a result of the Korean War. It was in 2009 when Busan's government decided to transform Gamcheon Village into a creative community, hiring artists to create street art.

I don't know if Gamcheon Village is still considered to be one of Busan's poorest areas but it sure didn't look like it from afar as we were going up the winding road to the village, nor did it look like it when we were strolling its streets.

Gamcheon Village was a barrage of colors. From afar, the thousands of little box–shaped houses of different sizes and colors, covering the side of a hill, looked like Lego bricks.

Walking the streets of Gamcheon, my head swiveled every which way—anything and everything caught my eye. Different colored birds perched on a wall, birds that upon closer inspection looked rather creepy with their human faces. ...... (follow the instructions below for accessing the rest of this article).
This article is featured in the app "GPSmyCity: Walks in 1K+ Cities" on iTunes App Store and Google Play. You can download the app to your mobile device to read the article offline and create a self-guided walking tour to visit the attractions featured in this article. The app turns your mobile device into a personal tour guide and it works offline, so no data plan is needed when traveling abroad.