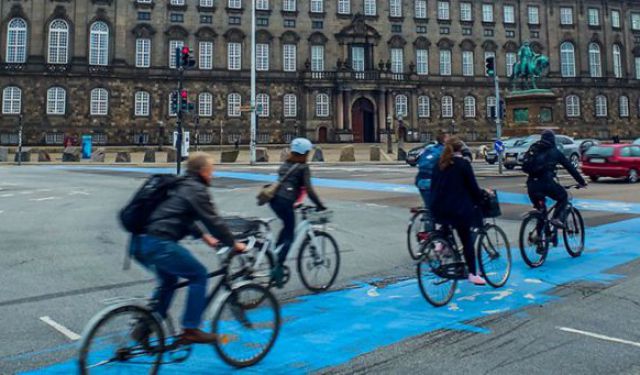 Get High and Eat Everything in Bike City, Copenhagen, Denmark (B)

We arrived in Copenhagen, Denmark knowing very little of our new host city. But as we spent our days and nights exploring the many interesting streets and neighborhoods, the personality of Bike City was slowly revealed: Bicycles, getting high, and eating everything.

Be careful, or you might get run over by a bike. Seriously, there are bike lanes between the sidewalk and every street, and if you’re not paying attention, well, bad things could happen. Copenhagen was officially elected as the first Bike City, and there are more bikes in this city (560,000), than residents (520,000). 50% of the city commutes to work on their bicycles every day, sun or snow, and that figure includes 63% of all Danish Parliament members. An estimated 1.2 million kilometers a year are ridden on bicycle through Copenhagen. Be like a local and rent a bike, or simply step out of the way and leave it to the pros.

If you think that getting high may enhance your experience, there are some notable spots worth seeking out while visiting Copenhagen: ...... (follow the instructions below for accessing the rest of this article).
This article is featured in the app "GPSmyCity: Walks in 1K+ Cities" on iTunes App Store and Google Play. You can download the app to your mobile device to read the article offline and create a self-guided walking tour to visit the attractions featured in this article. The app turns your mobile device into a personal tour guide and it works offline, so no data plan is needed when traveling abroad.