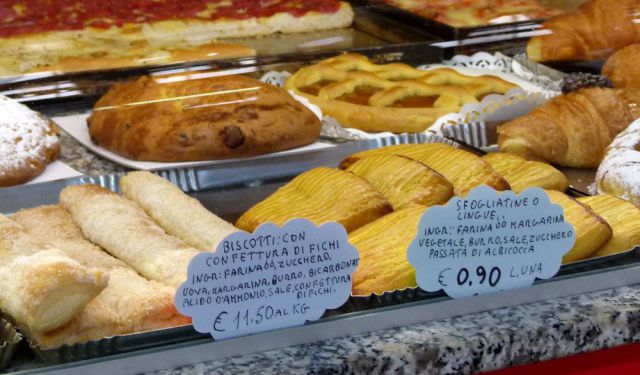 Gourmet Eating in the Rimini Area, Rimini, Italy (B)

Tourists with a taste for gourmet Italian food have always flocked to Emilia-Romagna, particularly to Bologna, with its signature meat sauce and cured meats, and Parma, famed for its ham and cheese. However, the Rimini area, in the south of Emilia-Romagna, has its own distinctive foods which will satisfy the most discerning palate.

Wherever you go you will find piadine. These are the flat circles of bread made from flour, water and lard that accompany every meal. They also appear in breakfast buffets and as part of a mixed starter, often rolled around a filling and sliced (a bit like a swiss roll). There are many specialist cafés (piadinerie) which serve piadine folded into four and wrapped around a variety of fillings (one café in nearby San Marino advertises 42 different fillings!).

There are many notable cheeses, especially Fossa, which is matured for three months in sandstone ditches. Fossa is traditionally linked with the mediaeval village of Talamello where the ditches are opened each year in November, but it is now also produced elsewhere in the region. Other local cheeses include Pecorino (sometimes wrapped in walnut leaves) and soft cheeses such as Squacquerone and Raviggiolo. ...... (follow the instructions below for accessing the rest of this article).
This article is featured in the app "GPSmyCity: Walks in 1K+ Cities" on iTunes App Store and Google Play. You can download the app to your mobile device to read the article offline and create a self-guided walking tour to visit the attractions featured in this article. The app turns your mobile device into a personal tour guide and it works offline, so no data plan is needed when traveling abroad.