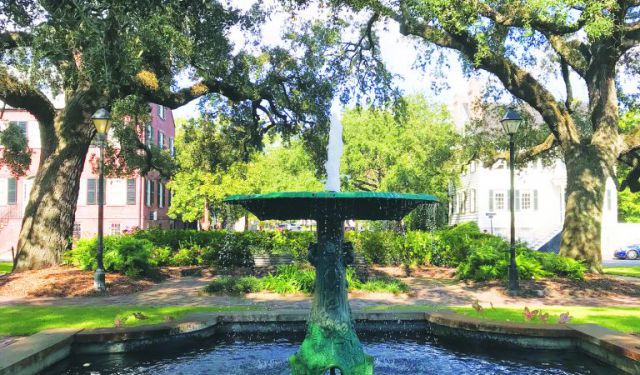 This section will cover the homes and other important buildings on and around Telfair, Wright, Oglethorpe, Columbia and Greene Squares. To explore this area, head west from Broad Street on either E. State Street, President Street or E. York Street. This area has some of the most historically important homes in the city, including the Isaiah Davenport House, the William Kehoe House, the Owen-Thomas House and the birthplace of the founder of the Girl Scouts, Juliette Gordon Low. Eventually you will come to the Telfair Museum of Art and the Jepson Center. The Jepson has 7,500 square feet dedicated to contemporary art. These last two are “must see” places for any visitor to Savannah.

Laid out in 1799 during Savannah’s first growth spurt since its founding in 1733, this square and its surrounding ward were named for Revolutionary War General and hero Nathanael Greene, aid to General George Washington and commander of the southern forces.

After the war, General Greene and his family settled at Mulberry Grove, an estate north of Savannah given to him by the state of Georgia in recognition of his service to the new country. He was to die of a stroke shortly afterwards and was interred in Colonial Cemetery. In 1902, his remains along with those of his son were re-interred in Johnson Square. ...... (follow the instructions below for accessing the rest of this article).
This article is featured in the app "GPSmyCity: Walks in 1K+ Cities" on iTunes App Store and Google Play. You can download the app to your mobile device to read the article offline and create a self-guided walking tour to visit the attractions featured in this article. The app turns your mobile device into a personal tour guide and it works offline, so no data plan is needed when traveling abroad.