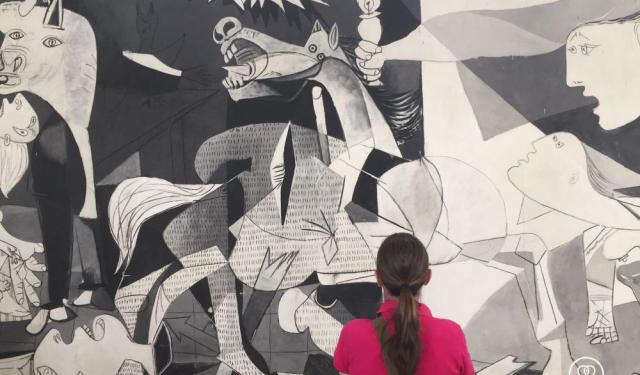 “No, painting is not made to decorate apartments. It’s an offensive and defensive weapon against the enemy” said Picasso.

And it can be such a powerful weapon that it can transcend the specific conflict to reach a universal status as a symbol of fight against barbarism. Such is the destiny of Guernica, Picasso’s most famous painting, an art and history icon showcasing strong artistic and political commitments.

The Spanish civil war broke out on the 17 July 1936 when General Francisco Franco led a military coup on the young republic and its democratically elected yet unstable popular government.

On the 26 April 1937, the Bask village of Gernika was bombed by the Nazi and fascist air forces, allied of Franco. This test for Hitler who was preparing for war is the first mass civilian bombing in history with hundreds of casualties and hardly any houses remaining standing in Gernika. Shortly after, Picasso read the reports in the press in Paris where he lived, and his reaction was almost immediate. As he was hardly inspired to execute a commissioned work for the Spanish pavilion at a Parisian international exhibit, he painted Guernica in only three weeks between May, 10th and June, 4th: a record time for such a massive painting! ...... (follow the instructions below for accessing the rest of this article).
This article is featured in the app "GPSmyCity: Walks in 1K+ Cities" on iTunes App Store and Google Play. You can download the app to your mobile device to read the article offline and create a self-guided walking tour to visit the attractions featured in this article. The app turns your mobile device into a personal tour guide and it works offline, so no data plan is needed when traveling abroad.