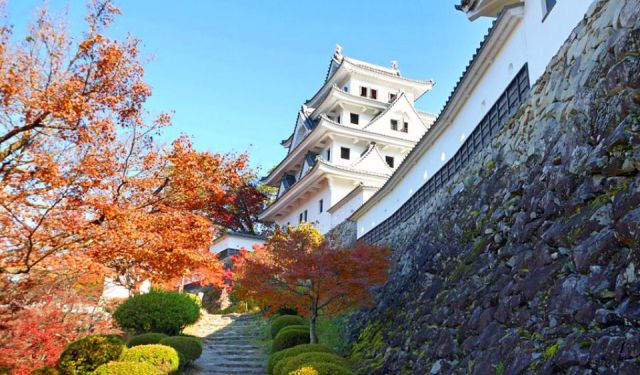 As I gaze across the valley all but the distant hilltops is hidden beneath a blanket of white clouds. I’m with a group of Japanese photographers who have been here since the early hours, patiently waiting to capture a rare sight. Every one of us is willing the clouds to part. It is now about 9 in the morning and I have only been here a few minutes when the mists slowly melt away, revealing the white fort. I can’t believe my luck. For a few moments, Hachiman Castle appears to be hovering in the clouds before disappearing once again into the mists. It is a phenomenon that has given it the nickname The Castle in the Sky.

Surrounded by Japanese maple trees, the white castle looks magnificent against the clear blue autumn sky. Some of the trees have already lost their leaves, but those that remain are a glorious red. And, now that the cloud has cleared, the views from the castle looking down on the town of Gujo-Hachiman are fabulous.

The castle was built in 1559 by the region’s feudal lord, a samurai who ruled over the region answering only to the shogun, the head of the samurai and ruler of Japan. The late 19th century saw the demise of the Tokugawa shogunate and the end of military rule, as power returned to the emperor in Kyoto. Seen as symbols of the shogunate many castles, including this one, were destroyed. What we see today is a reconstruction built in 1933, but it is no less beautiful and well worth seeing. ...... (follow the instructions below for accessing the rest of this article).
This article is featured in the app "GPSmyCity: Walks in 1K+ Cities" on iTunes App Store and Google Play. You can download the app to your mobile device to read the article offline and create a self-guided walking tour to visit the attractions featured in this article. The app turns your mobile device into a personal tour guide and it works offline, so no data plan is needed when traveling abroad.