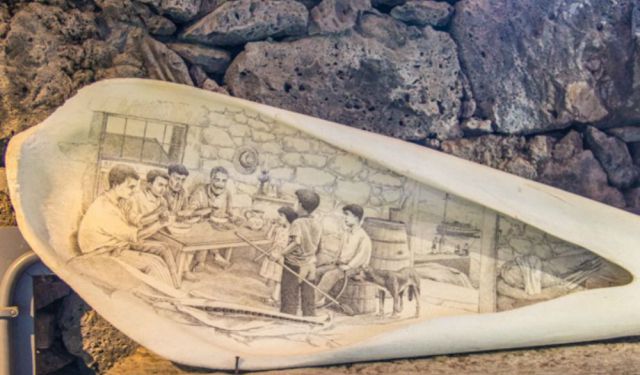 Hardship to Holidaymakers on Pico Island in the Azores, Pico Island, Portugal (B)

In an extraordinary turn around the hardships of the islanders on Pico in the Azoresduring the last century have now been turned into tourist attractions. Visitors to the island arrive at Madalena, the main town and port. When I arrived it was blurry through the rain but I could see it was an attractive, modern town.

When the first settlers arrived on the island during the fifteenth century they had to hew a living out of the hard, dark lava that clothes a large area of the land. All the work had to be done by hand and system was developed to protect the figs and vines from the extreme weather conditions while taking advantage of the fertile volcanic soil. I could only imagine how hard it had been to produce the small rectangles of cultivated land surrounded by dry stone walls made from blocks of basalt.

Large areas of the black lava have been left untouched by man leaving nature to create some dramatic landscapes. At Arcos do cachorro a large area of lava by the sea that has been eroded into caves, tunnels and other formations including one that looks remarkably like the head of a dog. Despite the persistent rain I decided to walk along the paths that have been created here to watch the sea pounding on the rocks. The white foam against the black rocks was a stark reminder of the power of nature. Behind me were some typical Pico houses. Here the houses are built with blocks of black basalt but some had been brightened up with white paint and red wooden doors and the characteristic exterior wooden steps were also painted red. ...... (follow the instructions below for accessing the rest of this article).
This article is featured in the app "GPSmyCity: Walks in 1K+ Cities" on iTunes App Store and Google Play. You can download the app to your mobile device to read the article offline and create a self-guided walking tour to visit the attractions featured in this article. The app turns your mobile device into a personal tour guide and it works offline, so no data plan is needed when traveling abroad.