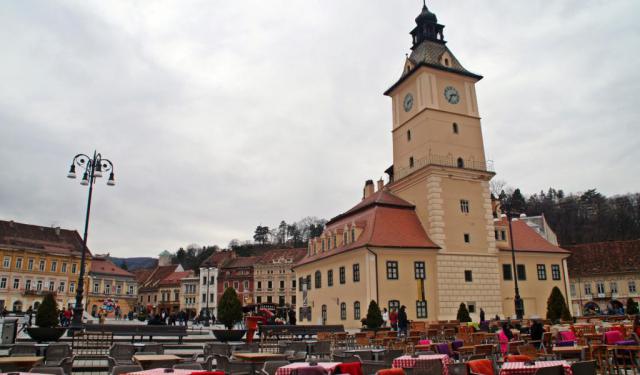 High Up in the Transylvanian Mountains: Brașov, Brasov, Romania (B)

On our second and last day in Romania, my mum and I decided to take a day trip out to Transylvania, a region in Central Romania known for its vampire stories, historic cities, cute mountain villages and scenic Carpathian landscape.

We left our hotel in Bucharest early in the morning and caught a bus from the Gara de Nord train station at 7 AM. The ride took 2,5 hours, most of which I spent sleeping. During the train ride, it became clear to us how different the rest of Romania is from its capital. We saw many run-down villages full of abandoned houses with smashed windows and peeled-off paint, but there were also many beautiful and colourful villages. And then the breathtaking Transylvanian nature. When we eventually reached the mountains, my mum woke me from my sleep, so we could enjoy the spectacular view together.

Brașov is the 7th most populous city in Romania with a population of 250,000. The city is known for its historic sights, its spectacular views of the Carpathian Mountains, its nearby ski resorts, and probably most of all, as the starting point for trips to Bran Castle, known as Dracula’s Castle, which we also went to (stay tuned for next post!). ...... (follow the instructions below for accessing the rest of this article).
This article is featured in the app "GPSmyCity: Walks in 1K+ Cities" on iTunes App Store and Google Play. You can download the app to your mobile device to read the article offline and create a self-guided walking tour to visit the attractions featured in this article. The app turns your mobile device into a personal tour guide and it works offline, so no data plan is needed when traveling abroad.