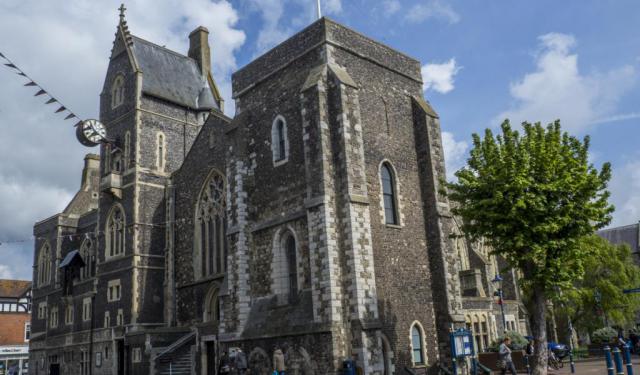 For centuries Dover has been at the forefront of conflicts involving England resulting in the construction of its magnificent castle to defend the town as well as other historic landmarks including the only painted Roman house in the country.

Dover, in Kent, consists of three very different areas. Its historic town centre, a long seafront and harbour in front of the town and a castle and cliff tops above the town. Its Museum in the historic Market Square is a good place to start a visit here.

Dover Museum is housed in the former Market Hall that was built in 1846. The Visitor Information Centre is in the entrance of this attractive listed building. Despite being severely damaged during the Second World War markets were held in the Market Hall until 1985 by which time the building was in a poor state of repair. The façade of the building was restored and a new three-storey building was built behind it. Dover Museum, one of the oldest museums in Kent (founded in 1836) moved into this building in 1991. Its history galleries relate the story of the town. The first floor is dedicated to a special exhibition which changes every year.  ...... (follow the instructions below for accessing the rest of this article).
This article is featured in the app "GPSmyCity: Walks in 1K+ Cities" on iTunes App Store and Google Play. You can download the app to your mobile device to read the article offline and create a self-guided walking tour to visit the attractions featured in this article. The app turns your mobile device into a personal tour guide and it works offline, so no data plan is needed when traveling abroad.