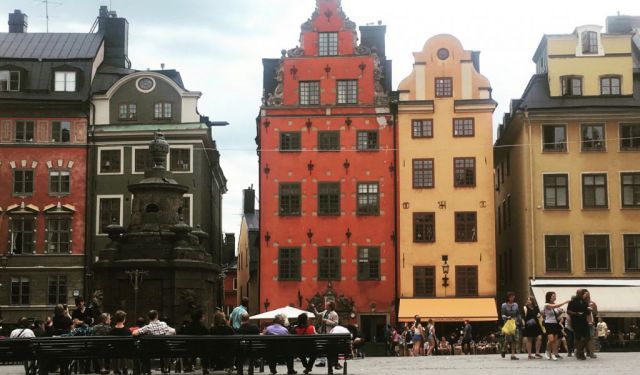 Stockholm was at the top of my 2017 travel goals list. I’m not sure what aspect of the city had the biggest draw on me – whether it was the conglomeration of different islands and canals that compose the city center, the beautiful, preserved Scandinavian architecture, the seamless IKEA-like design of just about everything, or the incredibly attractive people that inhabit this city. It was probably a combination of all of those reasons.

I flew into Stockholm’s Arlanda Airport on Norwegian Airlines. It cost €129 for a roundtrip ticket, leaving on a Friday and coming home on a Monday. From the airport, it’s about an hour bus ride to the City Center. I bought a bus ticket at a kiosk in the airport with the company Flygbussarna, which was $24 roundtrip (slight discount if you buy a roundtrip)

I stayed at City Hostel Central Station in Stockholm. It was clean and very well-run, with a fully equipped kitchen, comfortable beds, security lockers (bring your own lock) and fast wi-fi. It cost me about $22/night for a dorm bed. This is very expensive, but Scandinavia isn’t cheap, so don’t expect to find many better deals. Just bring earplugs to deal with sharing a room with strangers  ...... (follow the instructions below for accessing the rest of this article).
This article is featured in the app "GPSmyCity: Walks in 1K+ Cities" on iTunes App Store and Google Play. You can download the app to your mobile device to read the article offline and create a self-guided walking tour to visit the attractions featured in this article. The app turns your mobile device into a personal tour guide and it works offline, so no data plan is needed when traveling abroad.