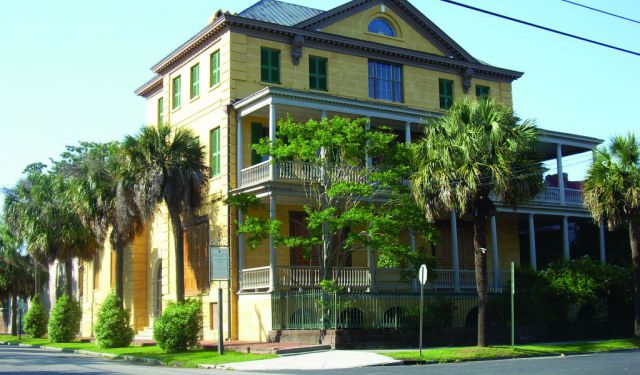 - Radcliffeborough: Originally farmland purchased and surveyed in 1786 by Thomas Radcliffe. Today, you can enjoy strolling through the residential streets.

- Ansonborough: The original walled city of Charleston in the 1700s. Over the years this area became nationally known for its outstanding neighborhood rehabilitation.

- Elliotborough: A mix of antebellum and Victorian-era houses. It sits on the site of Charleston’s front lines of defense during the Revolutionary War.

This is probably Charleston’s oldest existing private residence, built by Col. William Rhett around 1712. Rhett came to South Carolina in 1698 and quickly became a successful military leader. He was known as the “Scourge of the Pirates,” allegedly responsible for bringing both Blackbeard and Stede Bonnet to justice. He is buried in the St. Philip’s Graveyard on Church Street. The exterior of the house has been greatly altered over the years and is now privately owned. Private.

Construction on the house began in 1796 under the guidance of Mrs. Frances Motte Middleton. A year later Mrs. Middleton remarried and became known as Mrs. Frances Motte Middleton-Pinckney. In 1826 the house left family hands, and the owners have changed numerous times. Once the mansion served as the headquarters of Charleston city water works and recently served as the office for Charleston’s worldfamous Spoleto festival. Private. ...... (follow the instructions below for accessing the rest of this article).
This article is featured in the app "GPSmyCity: Walks in 1K+ Cities" on iTunes App Store and Google Play. You can download the app to your mobile device to read the article offline and create a self-guided walking tour to visit the attractions featured in this article. The app turns your mobile device into a personal tour guide and it works offline, so no data plan is needed when traveling abroad.