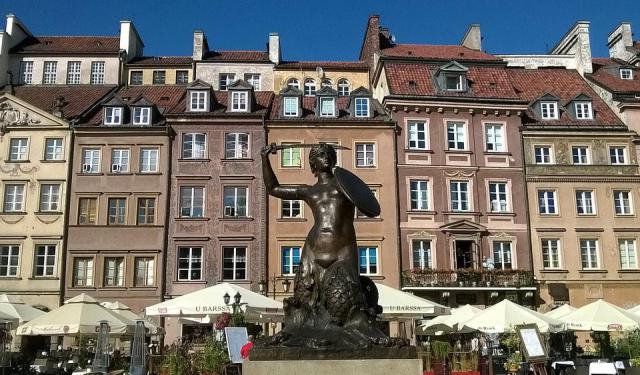 Historical Sites You Can't Miss in Warsaw, Warsaw, Poland (B)

Warsaw, like any other European city, is steeped in history. Most people think of Warsaw's history rooting to World War II and communism, but often forget about its medieval roots and intelligent minds like Copernicus, that made Warsaw what it is. Sadly, Warsaw got destroyed during the war, so in Old Town many of the facades you see were actually rebuilt post war, but in its original form.

Old Town Warsaw is where it all began, and sadly nine-tents of Warsaw was destroyed during the war.This sea of rubble became one of the most destroyed cities in Europe, and was rebuilt through 1962. This is the area where you'll see the majority of historical sites in town. Warsaw became an official city in 1323, and today there is no shortage of streetside cafes and shops waiting to be explored.

In the summer time, the streets are alive with musicians, street artists and locals enjoying life at the many outdoor cafes. In Old Town, some of the old ways of living and enjoying life in Europe are experienced throughout town.  ...... (follow the instructions below for accessing the rest of this article).
This article is featured in the app "GPSmyCity: Walks in 1K+ Cities" on iTunes App Store and Google Play. You can download the app to your mobile device to read the article offline and create a self-guided walking tour to visit the attractions featured in this article. The app turns your mobile device into a personal tour guide and it works offline, so no data plan is needed when traveling abroad.