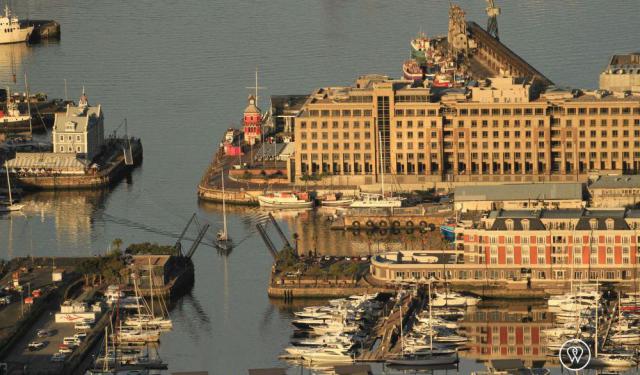 The V&A Waterfront is the most visited attraction of Africa with 24 million visitors in 2017. The most successful development project of the whole continent is also the oldest working harbour of the Southern Hemisphere. Take a walk between trendy shops, restaurants, dry docks and step back into history!

Competition was fierce by the Cape of Good Hope. With the Ottomans controlling the overland routes to the Far East, European powers were fighting for the control over the sea routes in the 15th century. The British, the French and the Portuguese were looming on the strategic replenishment station of the Dutch VOC (Dutch East India Company) at the Cape. After spending three to four months at sea, it was critical for sailors to pack on proteins and vitamins before continuing their journey to or from the Far East and avoid the deadly scurvy. To protect their assets here, at the Tavern of the Seas, the VOC built coastal fortifications along the Cape Peninsula including the Chavonnes Battery (1714-1725) to protect the Castle of Good Hope (1666-1679) which today is situated more inland. The sea shells shattered along the coast were crushed and cooked to create a limestone-based cement holding together the heavy granite and sandstones brought down from Table Mountain. As the strong Atlantic Ocean smashed into the fortifications, some of the stones were replaced by bricks from the Netherlands initially used as ballast in the ships of the VOC. Today, the 300-year old outer wall of the Chavonnes Battery and three of its 16 canons that protected the battery on a 180-degree angle can be seen by the passer-by. ...... (follow the instructions below for accessing the rest of this article).
This article is featured in the app "GPSmyCity: Walks in 1K+ Cities" on iTunes App Store and Google Play. You can download the app to your mobile device to read the article offline and create a self-guided walking tour to visit the attractions featured in this article. The app turns your mobile device into a personal tour guide and it works offline, so no data plan is needed when traveling abroad.