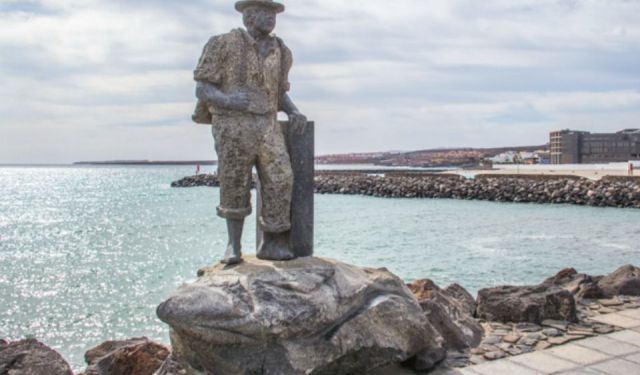 I travelled to Puerto del Rosario on the public bus. When I arrived at the bus station I appeared to be in the middle of nowhere. Leaving the bus station, I was looking for clues regarding the whereabouts of the town centre. All I could see was a huge sculpture in the middle of a roundabout. I had noticed a few of these as we got nearer the town. I was soon to discover the decoration of roundabouts and the painting of huge murals was part of an initiative at the beginning of this century to turn the town into a sculpture park. Most of the murals can be found along Wall Street.

Puerto del Rosario is the capital of Fuerteventura in the Canary Islands and I had expected the bus station would be in the centre of the town. I could see a glint of sea between some buildings ahead of me so I decided to head for the sea. On my way towards the sea front I passed the barracks. Stationing the Spanish military here had brought prosperity and people to the town. Initially the island had been divided into two kingdoms. After the island was conquered in 1402 it became the property of a nobleman or landlord who had absolute power, even in military matters. During the following centuries up until the end of the nineteenth century a military organisation of Colonels or Coronels, Lieutenants, Captains and Subalterns existed alongside the landlord. From the eighteenth century on the Colonel was also responsible for the weaponry and was the highest authority in the absence of the landlord. The Colonel was not only a prestige military man but also an important landowner. The army was comprised military groups made up of peasants and islanders who were obliged to take up arms and defend themselves in times of threat. This all changed in the nineteenth century when the feudal system was abolished and the first barracks were established in the new capital, Puerto del Rosario, in 1904. Since then several different military units have passed through these barracks. Today the barracks are still in use although the number of soldiers stationed there has been reduced. ...... (follow the instructions below for accessing the rest of this article).
This article is featured in the app "GPSmyCity: Walks in 1K+ Cities" on iTunes App Store and Google Play. You can download the app to your mobile device to read the article offline and create a self-guided walking tour to visit the attractions featured in this article. The app turns your mobile device into a personal tour guide and it works offline, so no data plan is needed when traveling abroad.