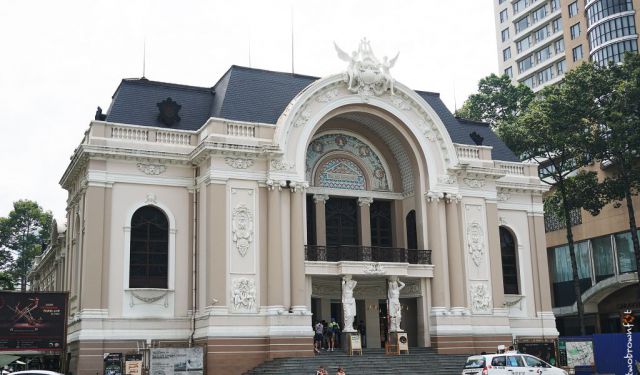 Hopping Back and Forth in Time in Ho Chi Mihn City, Saigon/HoChiMinh City, Vietnam (B)

We arrived in Ho Chi Mihn City, late in the evening, after an extremely long delay in Seoul. The rain poured down in torrents as our taxi made its way through rush hour traffic and I got the first glimpse of the city’s ubiquitous two-wheeler brigade. They whizzed by, negotiated nimble manoeuvres, doubled as pseudo-pedestrians on the pavement, and ensured that it would be very hard to ignore them. The next day, the sun would be out, and I’d have a very different view of the city and multiple reasons to debunk my first impressions of that wet, monsoon evening of July.

My solo trip around Ho Chi Mihn City started at Hotel Continental Saigon — our residence for a period of three days. Back then, I wasn’t acutely aware of its eclectic history, but I was definitely very impressed by its distinct architectural style and attempt to capture a glimpse of old world decadence. As I brushed up my reading (for this post) I learned: Hotel Continental Saigon hosted some famous names in the literary world such as Rabindranath Tagore and Graham Greene. The hotel also finds a mention in Greene’s book, “The Quiet American”. Built in 1880, the first hotel of of its time, during the height of French colonialism, Hotel Continental Saigon has witnessed war, change, and freedom — over its lifetime. ...... (follow the instructions below for accessing the rest of this article).
This article is featured in the app "GPSmyCity: Walks in 1K+ Cities" on iTunes App Store and Google Play. You can download the app to your mobile device to read the article offline and create a self-guided walking tour to visit the attractions featured in this article. The app turns your mobile device into a personal tour guide and it works offline, so no data plan is needed when traveling abroad.