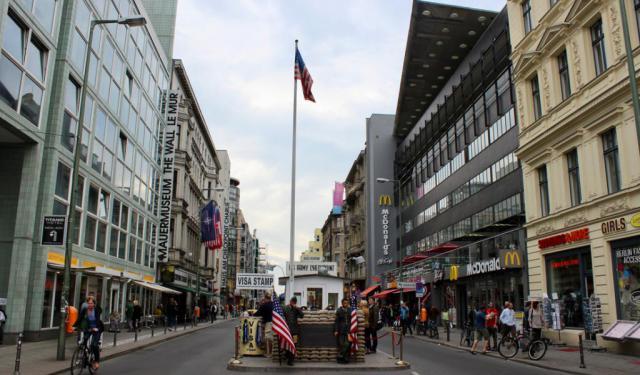 In Search of Communism in Berlin, Berlin, Germany (B)

Berlin, Germany’s Capital city, has gone through several changes throughout the last one-hundred years. From World War II to Communism to today’s hipster-chic culture, Berlin is one of the most visited in Germany. No matter where you go in the city, marks and architecture still reflect Germany’s past and its division between East and West Germany. Whether you’re searching for museums or interesting architecture, here are some interesting communistic spots in Berlin.

The GDR constructed the barbed wire and concrete “Antifascistischer Schutzwall,” or “antifascist bulwark," on August 13, 1961 to keep the Western Germany "fascists," out of the East. Various checkpoints at the wall allowed visitors to come in and out of East and West Germany, and those who tried to escape or climb over the wall were often shot and killed. The wall came down on November 9, 1989 when the GDR announced that anyone could come and go as they please. The citizens were ecstatic and held big parties, specifically near the Brandenburg Gate. Throughout Berlin travelers will notice plaques on top of a red brick line depicting where the wall once stood, and pieces of the wall that still stand today. For significant pieces of the wall, check out the Berlin Wall Memorial on Bernauer Strasse, the wall near the Topography of Terror on Niederkirchnerstrasse/Wilhelmstrasse, or the East Side Gallerynear Ostbahnhof.  ...... (follow the instructions below for accessing the rest of this article).
This article is featured in the app "GPSmyCity: Walks in 1K+ Cities" on iTunes App Store and Google Play. You can download the app to your mobile device to read the article offline and create a self-guided walking tour to visit the attractions featured in this article. The app turns your mobile device into a personal tour guide and it works offline, so no data plan is needed when traveling abroad.