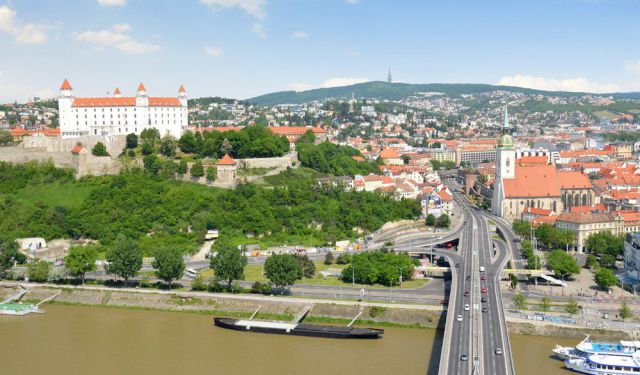 Is Bratislava Worth Visiting?, Bratislava, Slovakia (B)

Bratislava, the Slovakian capital, is rarely on the itinerary of the visitors traveling through Europe. Comparing to its famous neighbor - Prague, Bratislava is virtually non-existent in the eyes of a typical western tourist.

But because we love to go against the grain and discover the places which are less popular, during the long weekend in Prague, we jumped on the night bus and decided to spend a day in the capital of Slovakia. What did Bratislava turn out to be like? Was it worth visiting? Is it a good alternative to overrun by tourists, often overrated and expensive famous capitals?

Getting to Bratislava is extremely easy. You can take a flight from many major European cities or a bus from the nearby towns, like Prague or Budapest, however, I think the easiest way to get there is to travel from Vienna. Bratislava is located only around 70 km (45 miles) from the famous Austrian capital and it takes only around 1 hour to drive between those two cities.

There are no border controls as both countries are in the Schengen zone. So, I believe, if you're in Vienna and you're bored by its "perfectness", hop on the bus to Slovakia and see Bratislava which is a gateway to a slightly different world of Eastern Europe with its all aspects. ...... (follow the instructions below for accessing the rest of this article).
This article is featured in the app "GPSmyCity: Walks in 1K+ Cities" on iTunes App Store and Google Play. You can download the app to your mobile device to read the article offline and create a self-guided walking tour to visit the attractions featured in this article. The app turns your mobile device into a personal tour guide and it works offline, so no data plan is needed when traveling abroad.