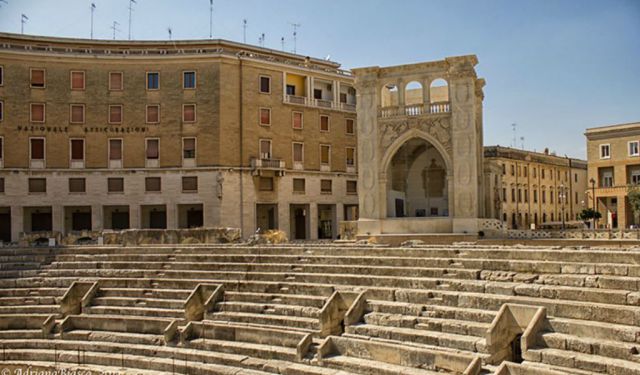 Deep down in Puglia in Italy’s south and in one of the most underrated cities of this fascinating region, you will discover a museum like no other you have ever come across during your travels. Lecce, the capital of Salento, in its spider’s web of streets doesn’t just offer architectural surprises at every corner, but also hides underground more than 2,000 years of history waiting to be discovered.

Beyond an unassuming and simple entrance in the old city centre of Lecce, you’ll come across a very special and privately owned museum called Museo Faggiano and if it hadn’t been for its mention on a Lonely Planet Guide, I would have easily missed it! It’s not just the treasure trove of remarkable archaelogical remains that will astound you, but the history behind the discovery of so many unique finds.

Back in 2001 the owner of the building, Luciano Faggiano, who had always dreamed of turning it into a restaurant, had to demolish the flooring to change some old sewage pipes that were causing condensation problems. Luciano was not at all prepared for what he was to unearth and excavation works revealed, by pure chance, several interesting architectural and historical finds showing evidence of the presence of ancient populations on this site. He found an underground world tracing back before the birth of Jesus: a Messapian tomb, a Roman granary, a Franciscan chapel and even etchings from the Knights Templars in a rooftop tower! ...... (follow the instructions below for accessing the rest of this article).
This article is featured in the app "GPSmyCity: Walks in 1K+ Cities" on iTunes App Store and Google Play. You can download the app to your mobile device to read the article offline and create a self-guided walking tour to visit the attractions featured in this article. The app turns your mobile device into a personal tour guide and it works offline, so no data plan is needed when traveling abroad.