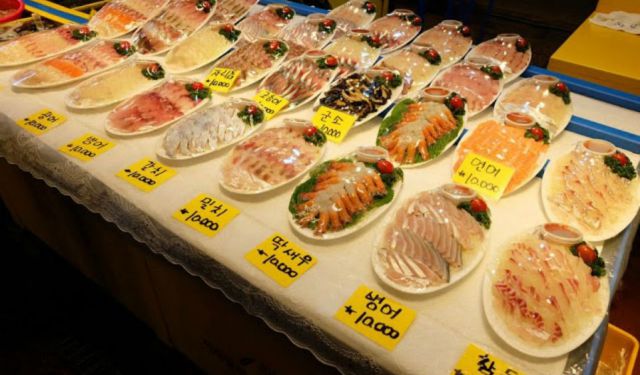 It's a privilege to have someone local show you around and feed you the best local eats. A million thanks to JaeHwa and JungIn!

JaeHwa, who lives in Jeju City, took me and JungIn to this restaurant to try 제주흑돼지 Jeju heuk dwaeji, which is pork from a black pig. According to JungIn, who lives in Busan, this type of meat can only be had in Jeju.

We had the 600g serving of heuk dwaeji [54,000 won] and a bowl of kimchi soup [6,000 won]. The pork is cut in pieces and grilled. There are three ways to eat the pork. One is to dip it in the salty anchovy sauce that is heated on the grill. Another is to just dab a bit of salt on the pork. And the third way to eat heuk dwaeji, like samgyupsal and other grilled meat dishes, is to put it on a perilla leaf and add a bit of kimchi, a piece of garlic, a strip of onion. I found the pork tender and juicy but a tad too big to be eaten in one mouthful, which JaeHwa insists is the right way to eat it! This restaurant is popular with the locals as evidenced by the fully occupied tables when we visited. ...... (follow the instructions below for accessing the rest of this article).
This article is featured in the app "GPSmyCity: Walks in 1K+ Cities" on iTunes App Store and Google Play. You can download the app to your mobile device to read the article offline and create a self-guided walking tour to visit the attractions featured in this article. The app turns your mobile device into a personal tour guide and it works offline, so no data plan is needed when traveling abroad.