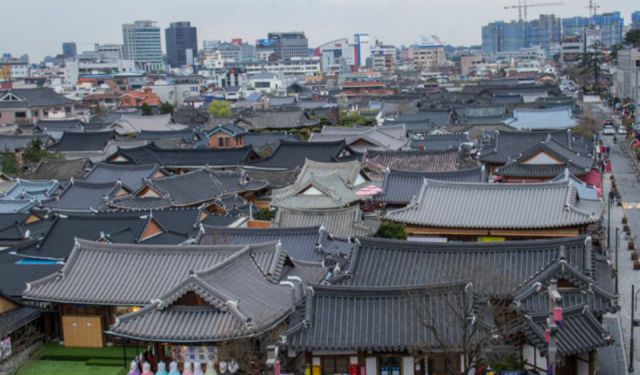 The small town of Jeonju in South Korea is inextricably linked with the history of Korea. One of its most important historical monuments is the Omokdae Terrace. This terrace, on top of the hill overlooking the town is famous as the place where Yi Seong Gye hosted an outdoor banquet for his family on his way back to Gaegyeong after winning a victory against Japanese invaders. During this banquet Yi Seong Gye recited the Daepungga song that Liu Bang founder of the Han Dynasty, once sang as an expression of his ambition to found a new country of his own. This is significant because, thanks to his military prowess, Yi Seong-gye founded the Joseon Dynasty in Korea. He was the first king, King Taejo, of this new dynasty. The Imokdae Pavilion on the terrace commemorates this event.

As I made my way down the wooden steps from the terrace I had a great panoramic view of Jeonju below me. In particular I could see the contrast between the Jeonju Hanok Village and the modern town. I could also pick out another historically important building, Gyeonggijeon Shrine of Jeonju. Originally built in 1410 this palace was re-built in 1614. Inside its compound are shrines, storehouses and guardrooms that were once used for Confucian rituals. The official religion of the Joseon Dynasty was Confucianism. This philosophy respects its ancestors and although Yi Seong-gye was not born in Jeonju his family originated from here. The wall of Gyeonggijeon was built to hold an official royal portrait of King Taejo. A copy of the original portrait and the only portrait of this king is now housed in the Royal Portrait Museum inside the shrine with portraits of other Joseon monarchs. ...... (follow the instructions below for accessing the rest of this article).
This article is featured in the app "GPSmyCity: Walks in 1K+ Cities" on iTunes App Store and Google Play. You can download the app to your mobile device to read the article offline and create a self-guided walking tour to visit the attractions featured in this article. The app turns your mobile device into a personal tour guide and it works offline, so no data plan is needed when traveling abroad.