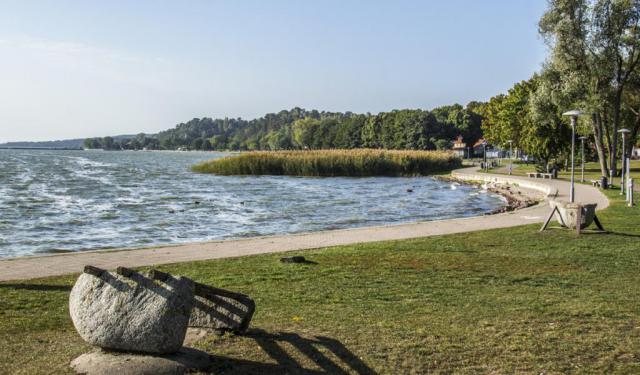 Juodkrante and the Curious Curonian Spit, Nida, Lithuania (B)

According to legend the Curonian Spit, a long, narrow strip of land that separates the Curonian Lagoon from the Baltic Sea was built by a gentle giant known as Neringa. She was wooed by a dragon and when she spurned him the dragon began terrorising the fishermen when they took their boats out to sea. To protect them Neringa scooped up sand from the sea bed in her apron time and again and made a barrier that kept the dragon out. The spit is ninety-eight kilometres in length. Lithuania owns fifty-two kilometres and the rest belongs to Kaliningrad in Russia. Neringa is also the name of the town that occupies the whole of the Lithuanian section. Within this municipality are five distinct settlements – Alksnynė, Pervalka, Preila, Nida and Juodkrantė.

Recognised as a world heritage site by UNESCO this area has some very unique attractions. Some of these can be found in Juodkrantė, in the middle of Neringa. Originally a small fishing village, Juodkrantė is surrounded by the largest crescent shaped range of sand dunes. These were once migrating sand dunes, shifted by the wind and the sea and are known to have buried small fishing villages on the spit. Pine forests were planted to stabilize these sandy hills and Juodkrantė is home to the Curonian Spit ancient forest. Visitors can explore this old forest by following the Dendrology Trail – an easy walk of 1.6 kilometres. There are sixteen stations along the way with descriptions of the trees and shrubs that are found there. A curious wooden structure in this forest that resembles a megaphone and is known as the Forest Megaphone, is a good place to pause and listen to the sounds of the forest. ...... (follow the instructions below for accessing the rest of this article).
This article is featured in the app "GPSmyCity: Walks in 1K+ Cities" on iTunes App Store and Google Play. You can download the app to your mobile device to read the article offline and create a self-guided walking tour to visit the attractions featured in this article. The app turns your mobile device into a personal tour guide and it works offline, so no data plan is needed when traveling abroad.