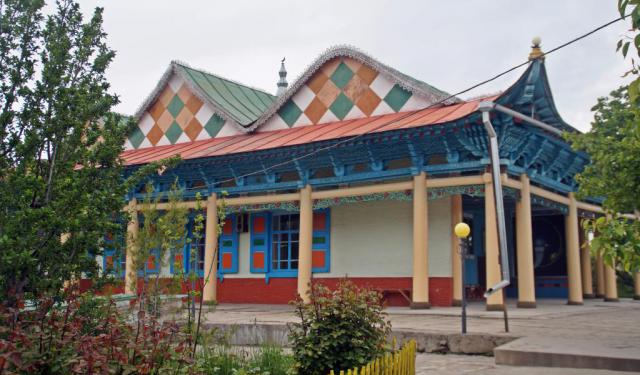 Karakol: By the Eastern Tip of Lake Issyk Kul, Karakol, Kyrgyzstan (B)

After spending a few days in the Kyrgyz capital, it was time to take on a new city. Karakol is a city with 75.000 inhabitants, located near the Issyk Kul Lake in the easternmost corner of Kyrgyzstan. Karakol is a top destination for travellers in Kyrgyzstan due to the amazing and diverse nature found in the area, and because of this, we decided to spend four nights there, which was the longest amount of time that we spent in any place in Central Asia.

We caught a shared taxi from Bishkek in the morning, which took about 6 hours to arrive in Karakol. It was a beautiful and sunny day, so it was perfect to see our first views of the stunning Kyrgyz nature on the drive. After about 3 hours, we finally saw the Issyk Kul Lake and followed it for the remaining time until we reached Karakol. Issyk Kul is an endorheic lake in the northern Tian Shan Mountains and it’s the 10th largest lake in the world by volume. It’s also the second largest saline lake after the Caspian Sea and the second largest mountain lake after Lake Titicaca. The name “Issyk Kul” means “warm lake” in Kyrgyz, which was given to the lake because it never freezes despite being surrounded by snow-capped mountains. Issyk Kul is at an altitude of 1,607 metres and reaches 668 metres in depth. ...... (follow the instructions below for accessing the rest of this article).
This article is featured in the app "GPSmyCity: Walks in 1K+ Cities" on iTunes App Store and Google Play. You can download the app to your mobile device to read the article offline and create a self-guided walking tour to visit the attractions featured in this article. The app turns your mobile device into a personal tour guide and it works offline, so no data plan is needed when traveling abroad.