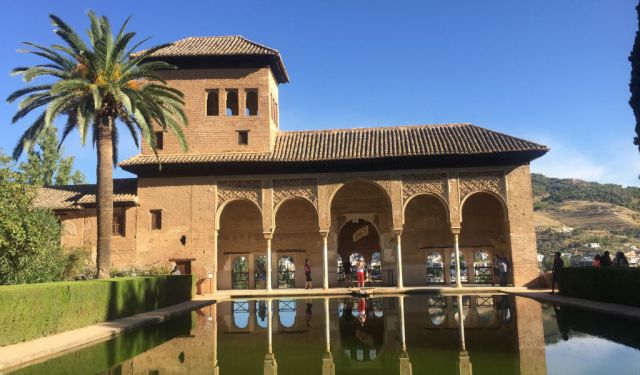 Like many people, my main reason for coming to Granada was to see the Alhambra, the famous Moorish palace that is now a UNESCO World Heritage Site. Originally built as a small fortress in the 1st century, it was taken over by the Moors in the 13th century as they fled south. Mohammed ben Alhamar, the first of the Nasrid Dynasty, decided to make Granada the grandest city of Andalusia. The magnificent hilltop palace of Alhambra was built and the Moors ruled until the Catholics overcame them in 1492. King Ferdinand and Queen Isabella made the palace their royal court. Christopher Columbus received their endorsement for his expedition here. In time Christian and Renaissance influences were incorporated into the buildings but the Moorish influence remains strong. Laurie Lee in his wonderful book A Rose For Wintersays of Granada that it ‘is probably the most beautiful and haunting of all Spanish cities; an African paradise set under the Sierras like a rose preserved in snow.’

For a few centuries the Alhambra fell into disrepair and some of the site was destroyed by Napoleon. Fortunately it was later rediscovered and restored and is now one of Spain’s most popular tourist attractions, with over 6,000 visitors each day. This means that it is essential you buy a ticket well in advance of a proposed visit. I bought my ticket 4 months ago after reading you should do so at least 90 days in advance. I decided to book a tour. It’s not something I do usually, except recently some food tours, but it gave me the chance to get into the Alhambra early (at 8.00am) to make a head start on the crowds but also, because it is so large, I knew I’d learn and see so much more with an expert leading me. I booked with Viator, which was bought by TripAdvisor in 2014. They arranged the tour with locals Amigo Tours. It turned out to be a reasonable size group of 27 very nice people (especially an Australian couple Di and Andrew I got talking to along the way) and our young guide Juan was fantastic – full of knowledge and with a nice sense of humour. ...... (follow the instructions below for accessing the rest of this article).
This article is featured in the app "GPSmyCity: Walks in 1K+ Cities" on iTunes App Store and Google Play. You can download the app to your mobile device to read the article offline and create a self-guided walking tour to visit the attractions featured in this article. The app turns your mobile device into a personal tour guide and it works offline, so no data plan is needed when traveling abroad.