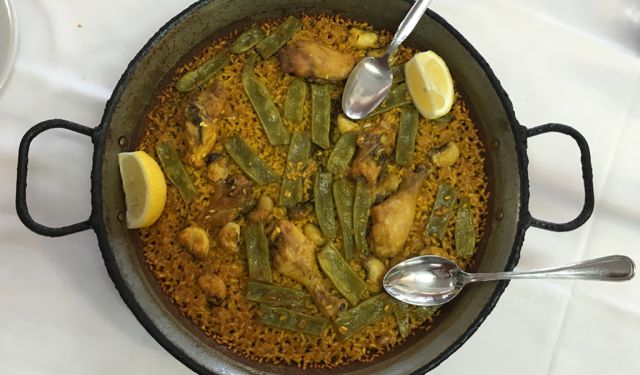 La Pepica: A Place to Experience the “Paella Valenciana”, Valencia, Spain (B)

It is world-wide known that Paella is a typical Spanish dish, however if you want to taste the most traditional Paella, you should definitely visit Valencia and try one there. Valencia is known as the birthplace of paella.

Main ingredients of Paella are rice, saffron, green beans and meat. It is actually a perfect example of cultural mixture. Paella is a unique dish derived from combination of Arabic and Spanish cuisine because the rice had imported to Iberia peninsula by the Arabs for the first time. The Spanish word for rice (arroz) was also derived from Arabic. Now, Spain is one of the leading countries in Europe for rice production.

Unlike arroz, the word “paella” comes from latin word “pattella” which means “pan”. This emphasis on pan is actually not a coincidence because paella gets its taste from the special pan that has a round shape and a flat bottom.

Before I came to Valencia, the first Paella that was coming to my mind was with the seafood however I learned that the original Paella is actually with chicken, rabbit, land snails, green beans and vegetables (Paella Valenciana). ...... (follow the instructions below for accessing the rest of this article).
This article is featured in the app "GPSmyCity: Walks in 1K+ Cities" on iTunes App Store and Google Play. You can download the app to your mobile device to read the article offline and create a self-guided walking tour to visit the attractions featured in this article. The app turns your mobile device into a personal tour guide and it works offline, so no data plan is needed when traveling abroad.