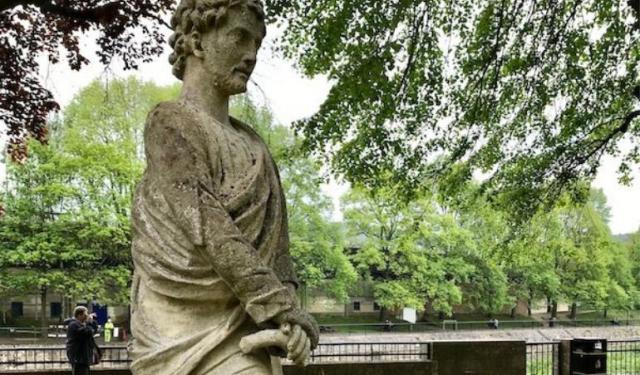 King Bladud, the 9th King of the Britons, is known for two very different things: First, he (and his pigs) discovered the healing powers of the warm mineral spring in Bath, England, and second, he made himself a pair of wings and took flight.

The city of Bath, England is named after the Roman Baths which were built there around 60 AD. But the Romans weren’t the first ones to bathe in that warm mineral spring water. According to legend, Prince Bladud had discovered that bubbling spring 900 years earlier – around 863 BC. (That’s 110 years before the city of Rome was even founded.)

The first mention of King Bladud’s remarkable story comes from Geoffrey of Monmouth’s History of the Kings of Britain written in the 12th century. But there’s a pretty good chance Geoffrey made up at least some of it – he was known for embellishing his stories.

Over the years, the tale of Bladud, the King who founded Bath, was expanded upon and added to, and there have been many versions. Here is mine… ...... (follow the instructions below for accessing the rest of this article).
This article is featured in the app "GPSmyCity: Walks in 1K+ Cities" on iTunes App Store and Google Play. You can download the app to your mobile device to read the article offline and create a self-guided walking tour to visit the attractions featured in this article. The app turns your mobile device into a personal tour guide and it works offline, so no data plan is needed when traveling abroad.