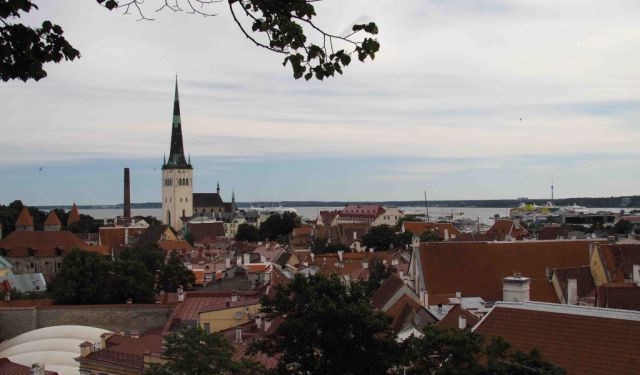 Tallinn, the capital and largest city of Estonia was quite enjoyable. It may have been our favorite city on the tour thus far. Perhaps it was a pleasant surprise because we hardly knew anything about Estonia or this medieval city whose old town is a UNESCO World Heritage Site.

Established on the map in 1154, the city was conquered by Valdemar II of Denmark in 1219 and sold to the Hanseatic League in 1285. Tallinn passed into Swedish hands in 1561 and then to Russia under Peter the Great in 1710. In 1918, Tallinn excerpted its own independence before being occupied by the Soveit Union which was then conquered by Nazi Germany (1941-44) only to be retaken by the Soviets. Estonia again declared its independence in 1991.

Tallinn is now home to 430,000 people, about one third of Estonia’s population. Estonia has its own language and there is not a word to distinguish between he and she. Everyone is an “it”. Fortunately, our tour guide spoke fantastic English. She said TV helps a lot. ...... (follow the instructions below for accessing the rest of this article).
This article is featured in the app "GPSmyCity: Walks in 1K+ Cities" on iTunes App Store and Google Play. You can download the app to your mobile device to read the article offline and create a self-guided walking tour to visit the attractions featured in this article. The app turns your mobile device into a personal tour guide and it works offline, so no data plan is needed when traveling abroad.