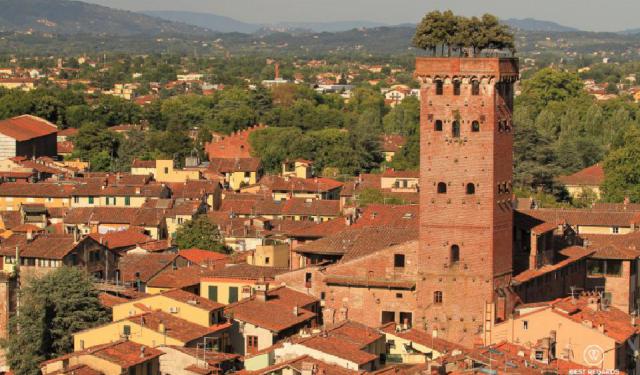 Lucca is this kind of city. The more time you spend here, the longer you want to stay. Yes, the picturesque walled Tuscan city at the foot of the Apennine Mountains and along the Serchio River is touristy. Still it remains an authentic city with a very nice atmosphere, different from a slightly arrogant museum-Florence (don’t get me wrong, Florence can be wonderful, but it has also been the victim of its success and mass tourism seems to have taken the best of it) or quick-cruise-stop Pisa. How long to plan for Lucca? Two days is the absolute minimum, spending at least a night within the city walls. Here are many ideas sorted out by themes to spend a good 4 to 5 days in the city, including climbing its towers, visiting excellent museums, tasting and cooking delicious Tuscan specialties, listening to some Puccini, and experiencing unexpected outdoor activities.

Founded by the Etruscans, inhabited by the Ligurians, Lucca became an important Roman city in the second century before Christ at the crossroads of some of the empire’s main way of communication, both by land and by water thanks to the Serchio River. Today’s Via Paolino and Via Fillungo lined with inviting shops still form the cross that was in the center of the squared Roman city. The arena where gladiators used to compete in front of 10,000 spectators is now the touristic Piazza Anfiteatro with its many restaurants. It denotes with its circular shape that has remained: after the Barbarian invasions, its stones were reused to build houses against its outside structure. ...... (follow the instructions below for accessing the rest of this article).
This article is featured in the app "GPSmyCity: Walks in 1K+ Cities" on iTunes App Store and Google Play. You can download the app to your mobile device to read the article offline and create a self-guided walking tour to visit the attractions featured in this article. The app turns your mobile device into a personal tour guide and it works offline, so no data plan is needed when traveling abroad.