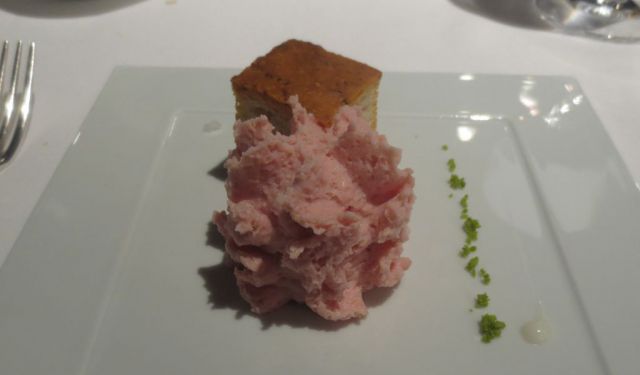 It’s a modest entrance that belies the wonder that is Massimo Bottura’s restaurant,Osteria Francescana, in a back street in Modena. Take a right fork in the road off Corso Canal Chiaro as you move away from Modena’s Piazza Grande into via Stella and pretty as it is, in its inimitable Italian way, it’s not where you’d first think to find a 3* Michelin restaurant voted 3rd best in the world in London last Monday at the prestigious San Pelligrino World’s Top 50 Restaurants Awards. The door didn’t open; it was locked. But I’d been heard and as it was opened to me and I was greeted by – three or four people? – I entered a whole new world. A little like Alice, I’d entered a small doorway into a world of magic where things aren’t always what they seem – their lemon tarts for instance.

Ah yes, the lemon tart, known at Osteria Francescana as ‘Ooops. I Dropped the Lemon Tart’. It was one of the things that led me there. That and Masterchef the Professionals when I watched the finalists being taken to Modena in one of the series’ final programmes last December and saw Massimo Bottura show the contestants how he made one of his signature dishes – the lemon tart. I was awed by Massimo. He’s been likened to an Italian version of Heston Blumenthal but for me, Bottura’s food looked not just like art but food I’d actually want to eat. Food I would love. Food cooked with passion and enthusiasm as the artist Bottura created dishes in his kitchen that spoke to me of … You have to go to Modena; you have to eat there. And so, on my first morning in Bologna on Wednesday, having arrived only the previous evening, I set off across the city after breakfast to the train station and headed out to Modena. ...... (follow the instructions below for accessing the rest of this article).
This article is featured in the app "GPSmyCity: Walks in 1K+ Cities" on iTunes App Store and Google Play. You can download the app to your mobile device to read the article offline and create a self-guided walking tour to visit the attractions featured in this article. The app turns your mobile device into a personal tour guide and it works offline, so no data plan is needed when traveling abroad.