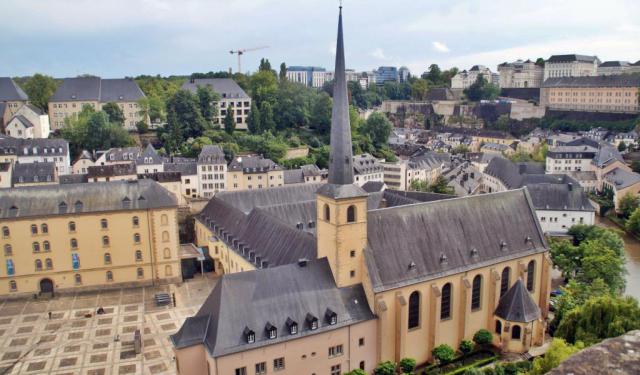 It was early hours in the morning when I arrived in Luxembourg City. 2.15 AM to be precise. I hadn’t booked a hostel, as I figured I could sleep on the 6-hour bus ride and then just wait in the hostel lobby until morning. But alas, I didn’t catch one minute of sleep on the bus, so I was absolutely knackered when I made it to the hostel at 3 AM. I decided to book a room and get some hours of rest, despite the expensive Western European price.

The next morning, I got up at 8.30 AM, ready for a day of sightseeing in Luxembourg City. Luxembourg City is the capital of Luxembourg (or officially “the Grand Duchy of Luxembourg”), a tiny country located in between France, Germany and Belgium. Luxembourg is one of the smallest countries in Europe, and also one of the least-populous countries with a population of only 580,000, of which almost 50 % are not Luxembourgers. Luxembourg is also the world’s only remaining grand duchy, as it’s headed by a Grand Duke. The country has one of the world’s highest GDP per capita and is considered one of the safest and best countries to live in, and it’s also very safe to travel in as a solo female! ...... (follow the instructions below for accessing the rest of this article).
This article is featured in the app "GPSmyCity: Walks in 1K+ Cities" on iTunes App Store and Google Play. You can download the app to your mobile device to read the article offline and create a self-guided walking tour to visit the attractions featured in this article. The app turns your mobile device into a personal tour guide and it works offline, so no data plan is needed when traveling abroad.