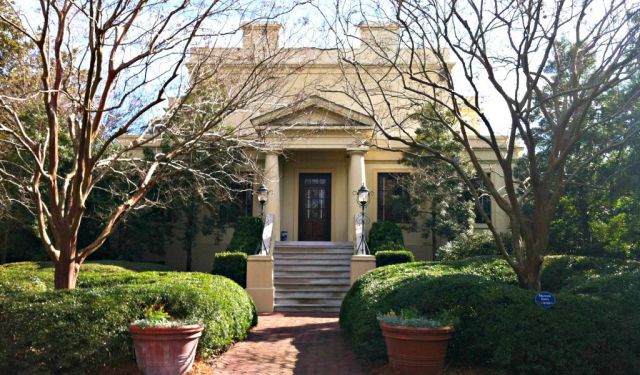 This main thoroughfare in downtown Savannah marks the western edge of the official Historic District. Named to honor Dr. King, the boulevard is the location of several sites relating to the civil rights struggle that Dr. King led. Dr. King actually gave his “I Have a Dream” sermon here in Savannah before he repeated the sermon during the famous March on Washington D. C. in 1963.

While “MLK,” as locals call it, is not a neighborhood, there are of a number of interesting places along its length including the‘Visitor Center,“ a good place to begin your Savannah explorations.

First Bryan Baptist Church is the oldest continuous African-American Baptist church in the United States. The present building, designed by John B. Hogg and completed in 1873-1888, sits on land that was once part of a Yamacraw Indian village. A Savannah slave, Andrew Bryan, organized the church in 1788 and served as the first pastor. Five years later, Bryan purchased his freedom and then purchased the present site of the church for "thirty pounds sterling" and the first church building was constructed in 1795. For more information, call (912) 232-5526 ...... (follow the instructions below for accessing the rest of this article).
This article is featured in the app "GPSmyCity: Walks in 1K+ Cities" on iTunes App Store and Google Play. You can download the app to your mobile device to read the article offline and create a self-guided walking tour to visit the attractions featured in this article. The app turns your mobile device into a personal tour guide and it works offline, so no data plan is needed when traveling abroad.